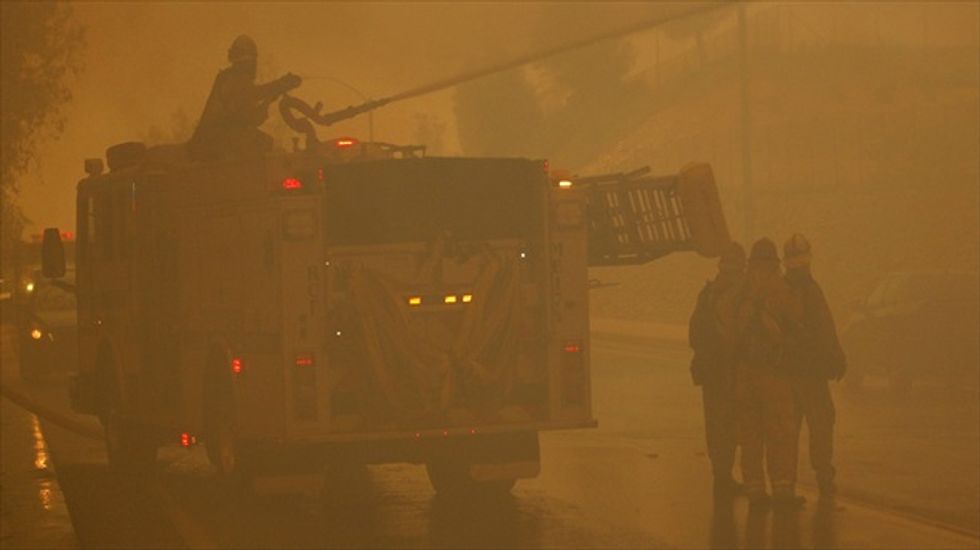 SALMON, Idaho (Reuters) - The U.S. government expects to spend $470 million more than it has on hand to fight wildfires in a season that has already brought large blazes to California and Western states, where drought is worsening fire risks, federal officials said on Friday.

Predicted high temperatures and less moisture for much of the U.S. West are expected to boost firefighting costs to nearly $1.87 billion this year for agencies that only have $1.4 billion budgeted, according to the U.S. Forest Service and Bureau of Land Management.

A provision in President Barack Obama's 2015 budget proposal and legislation pending in Congress would use federal disaster funds for expenses tied to catastrophic wildfires, which represent 1 percent of blazes but which cost roughly $400 million a year to contain, according to fire managers.

For instance, a blaze in southern California broke out on Wednesday, driven by Santa Ana winds, which sweep hot air from California's desert through mountain passes and river canyons.

"The big fires in California tend to be in the fall with Santa Ana winds," Eardley said.

The 2,200-acre fire north of the affluent community of Rancho Cucamonga in the foothills of the San Bernardino Mountains was 53 percent contained on Friday, and evacuation orders were lifted for hundreds forced to flee their homes, fire information officer Carol Underhill said.

Fire risks are to remain high in May for drought-stricken states like California, Arizona, New Mexico and Alaska, and hazards will intensify in June for Nevada and Oregon, according to forecasts by the National Interagency Fire Center.

Snowfall and rain have reduced the threat of wildfires in the Northern Rockies for the moment, but continued drought in southwest Idaho will worsen the fire outlook there July through August, federal forecasts show.

Wildfires in the western United States have been growing larger and more frequent for the past 30 years, increasing by seven fires a year and expanding at a rate of 90,000 acres annually, according to a study by the University of Utah and University of California-Berkeley.