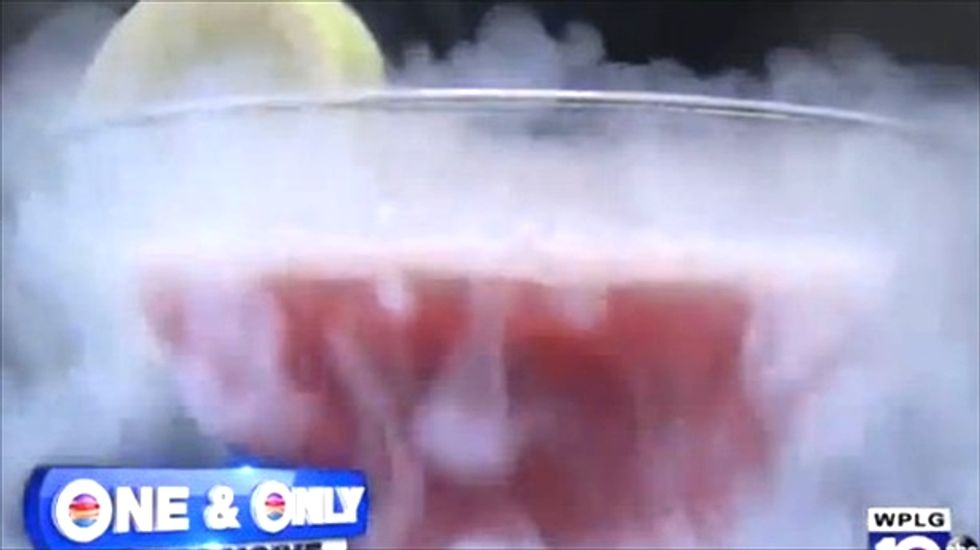 MIAMI BEACH, Florida (Reuters) - A trendy South Beach restaurant has pulled liquid nitrogen cocktails off its menu after a woman was served a drink with too much of the sub-zero liquid and was rushed to the hospital with a burned esophagus.

Luxury "cryogenic cocktails" have become popular, with bartenders using small amounts of liquid nitrogen to create smoking drinks. The liquid can also instantly freeze everything from ice cream to fruit, which then easily shatters into glass-like shards.

In late January, Barbara Kaufman, 61, was attending a fundraiser at the Miami Beach Botanical Garden when she took a sip of the drink and doubled over. "Immediately it felt like my head was truly exploding," Kaufman said.

Nitrogen, which occurs naturally in the earth's atmosphere as a gas, condenses into a liquid at temperatures minus 321 degrees Fahrenheit.

Kaufman was rushed to an emergency room where doctors performed surgery to close holes in her stomach and esophagus, and to allow the nitrogen, which was quickly expanding from a liquid to a gas, to escape her body.

Marc Brumer, Kaufman's lawyer, said she has racked up more than $135,000 in medical bills because of the incident.

The Miami Beach Botanical Garden and Kryogenifex, a Miami-based company that provides liquid nitrogen to restaurants and nightclubs, could not be reached for comment.

Watch a report on the incident, as aired on WPLG-TV earlier this week, below.