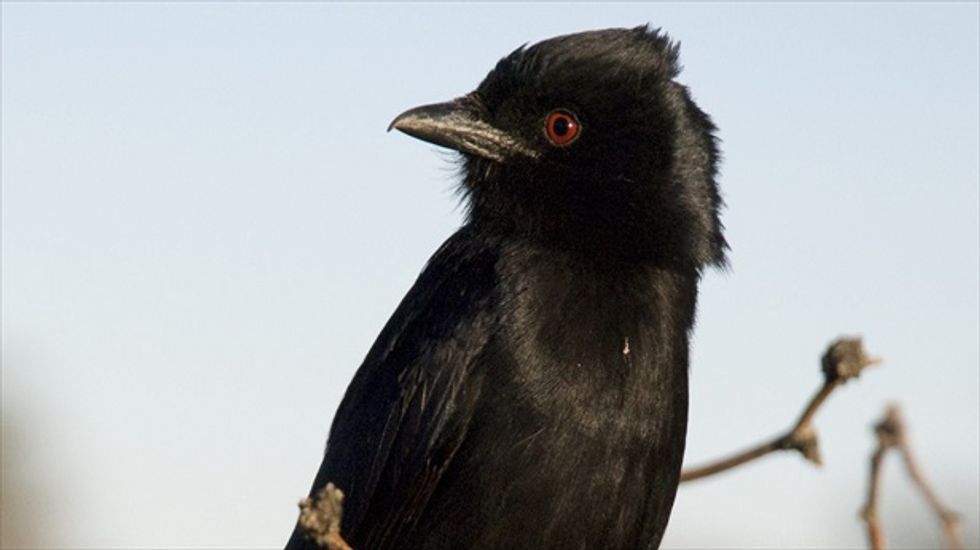 WASHINGTON (Reuters) - If you believe honesty is the best policy, you would have a hard time convincing the forked-tailed drongo. This tricky African bird is the pathological liar of the animal kingdom.

Scientists described on Thursday how this medium-sized bird brazenly deceives other animals by mimicking alarm calls made by numerous bird species - and even meerkats - to warn of an approaching predator in a ruse to frighten them off and steal food they leave behind.

The researchers tracked 64 forked-tailed drongos over a span of nearly 850 hours in the Kalahari Desert in South Africa close to the Botswana border to unravel this unique behavior.

"They're rather demonic little black birds with red eyes, a hooked beak and a forked tail," said evolutionary biologist Tom Flower of the University of Cape Town in South Africa.

"They're also highly aggressive and are renowned for attacking eagles and hawks, for which they apparently have no fear," added Flower, whose study appears in the journal Science.

These birds, common in southern Africa, usually get meals the honest way, such as capturing insects in mid-air using their superb aerial skills.

But at other times, like on cold mornings when few insects are flitting around, the drongos turn to a life of crime.

The drongos are able to mimic the sounds made by many different species that inhabit its desert environment, including birds such as pied babblers, glossy starlings, sociable weavers and pale chanting goshawks as well as mammals like meerkats.

The drongos carry out an elaborate con. They give their own genuine alarm call when they spot a predator approaching - essentially behaving as sentries - and other animals come to trust that this call signals real danger.

But they sometimes give this alarm call when no danger exists to fool other animals into fleeing and abandoning their food.

Then the drongos swoop down for a free lunch.

"Because drongos give reliable predator information some of the time, it maintains host responsiveness (of other animals) since they can never know if the drongo is lying or telling the truth," added Amanda Ridley, an evolutionary biologist at the University of Western Australia, another of the researchers.

The scientists noticed that sometimes the other animals "get wise" to the con and ignore repeated false alarm calls. But then the wily drongos simply grab another tool from their toolbox of trickery - they mimic the alarm calls made by other animals, once again conning them into fleeing and leaving their chow behind.

When stealing food from other animals, drongos are able to eat larger prey than they normally would be able to capture on their own like scorpions, beetle larvae and even geckos.

"Crime pays," Flower said, noting that the stolen stuff accounted for about a quarter of the food eaten by the drongos.

"One could argue that the strategy of the drongo to steal food from others seems very dishonorable in human standards. But, yes, if it has found such a crafty way to catch food, which is usually much larger than the food items it catches itself, then we cannot help but admire this clever little bird's adaptiveness," Ridley added.

The researchers classify the drongo as "a kleptoparasite."

There are many examples of mimicry and deception in the animal kingdom. About 20 percent of song birds mimic the calls of other birds, Flower noted.

"However, drongos are the only ones to flexibly produce the specific signals that best deceive their different hosts and to maintain their deception racket by changing signal when the previous signal failed," Flower added.

(Reporting by Will Dunham, editing by G Crosse)

[Image: Forked-tail drongo is shown perched in Kuruman River Reserve in South Africa in 2008 in this image courtesy of Tom Flower. Handout by Tom Flower for Reuters]