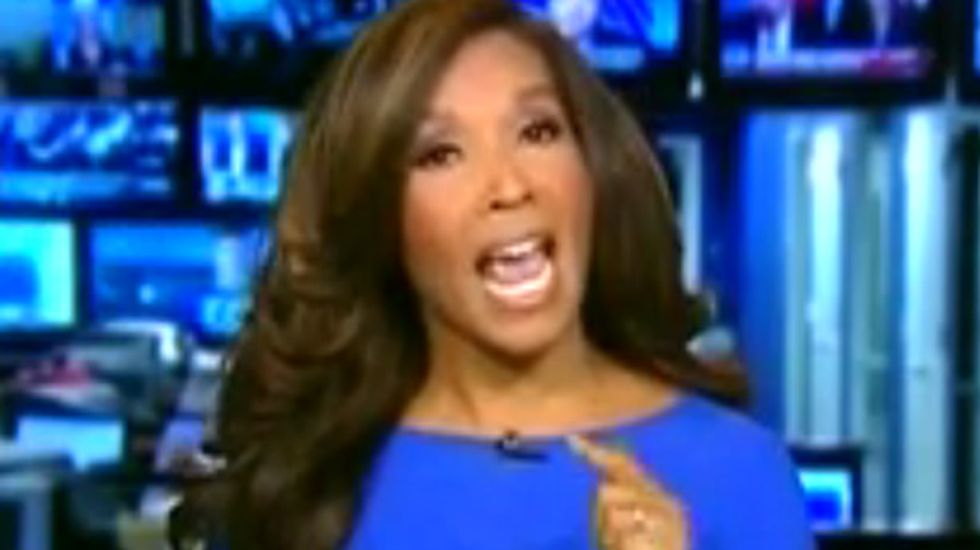 On Thursday, Fox News analyst Angela McGlowan compared Obama's second term in the White House to a form of slavery.

The segment begins with Fox News's moderator reading an excerpt from the National Review's Rich Lowry in which he compares the current state of the Obama presidency to what Lincoln called a "dead point" in his.

"The comparison...is that the Obama administration is essentially dead in the water, it's not going anywhere, its policies are mired in a lack of support," the host said.

His first guest, Santita Jackson, disagreed, accusing Fox News of "always trying to end this presidency instead of trying to mend it." Jackson noted that the Affordable Care Act was "a bipartisan idea that had bipartisan support -- that it came out of Romneycare...and the American Heritage Institute. We can agree on that, right Angela?"

"We agree on the fact that Americans are suffering," McGlowan replied, "but it's not because of Romneycare, or even the ACA. It's because of the poor leadership of President Barack Obama."

"He should have taken a playbook," she continued, "out of Bill Clinton and Newt Gingrich's playbook, out of even Ronald Reagan and Tip O'Neill's playbook, on how to be a leader when you have a Congress that is against your policy."

When Jackson asked her if she was really supporting Bill Clinton, McGlowan said she was, because he "was smart enough to sign 70 percent of the Contract With America, which was a Republican idea."

Jackson then said that instead of Clinton, maybe they ought to look back to Lyndon Baines Johnson, who fought the War on Poverty, which is "what Americans need today," but McGlowan would have none of it.

"May I interject?" she asked, then continued, "with Lincoln and Barack Obama you do have a slave mentality today. Even though we had the LBJ Great Society, we have a people enslaved on the government dole."

"We have people paying for people to have more kids out of wedlock, paying for more people to go to prison, instead of getting a job," she said.

"So we do have a problem with slavery today," she concluded, just "as Lincoln did back in the day. Even with LBJ’s policies, because you have certain people that want Obama-phones, free phones, free food stamps, and the whole nine yards."

Watch the entire exchange via Media Matters for America below.