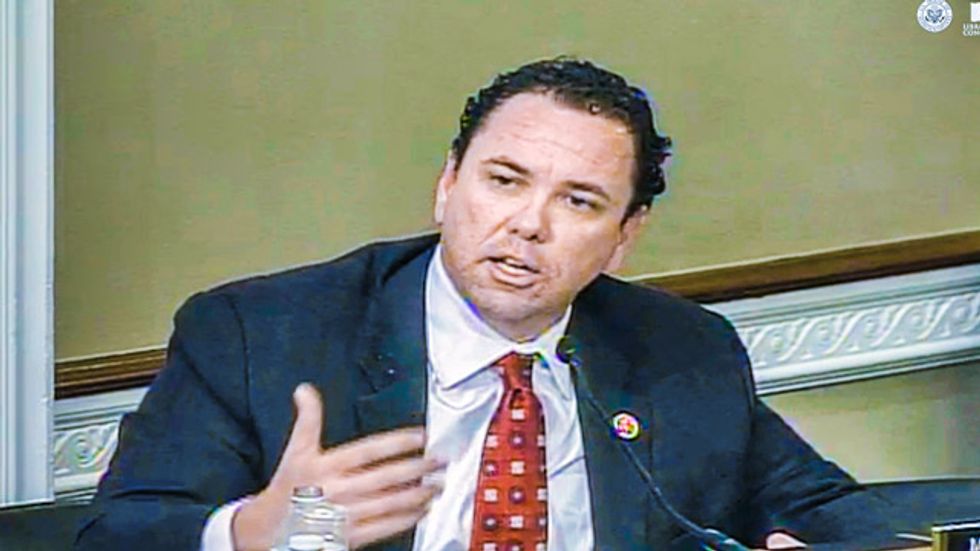 A Republican congressman from Louisiana this week blasted an environmental activist who submitted photos of leaking oil pipes that had been repaired with garbage bags and duct tape.

At a Tuesday hearing of the House Natural Resources Subcommittee on Fisheries, Wildlife, Oceans and Insular Affairs, Noah Matson, vice president of Defenders of Wildlife, said that existing one-paragraph regulations were inadequate for protecting the National Wildlife Refuge System.

To make his point, he presented a slideshow, including photos of oil pipes that had been covered with duct take and garbage bags at refuges in Louisiana.

"You took a picture of someone who was innovative, and rather than leaving the fluid to drip on the ground, repaired it with duct tape and a garbage bag, and yet you seem to be very upset about that," McAllister said. "We're damned if we do and damned if we don't."

"We take a garbage bag and fix it and keep it from leaking and yet you're still not happy, and come to Washington and testify before Congress and want to throw fits because some guy took initiative."

Matson pointed out that he had photos that showed a garbage bag repair from a year earlier, and no one had ever come back to complete the repair.

"Anybody can come there, a storm can come, it can puncture the garbage bag, and there's a spill," Matson explained. "Done."

"Could have, should have, would have. It didn't," McAllister shrugged. "I understand you're wanting to protect wildlife, and look, I love the great outdoors, and I live in Louisiana, a sportsman's paradise, and I love it too. But I'm not for giving ducks and deer weapons to shoot back at me."

"But it just aggravates me that the body of Congress would be wasted with someone coming up and taking picture of something that shows that is is fixed," he continued. "It may not be fixed the way you want it. It may not be used by these high-dollar couplings and aluminum-brass thread -- whatever you want put on them. But it's fixed. And it's not leaking."

"And that's what you want to turn your testimony into is some pictures portraying the innovation of what America is."

Watch the video below from the U.S. House of Representatives, broadcast May 20, 2014.