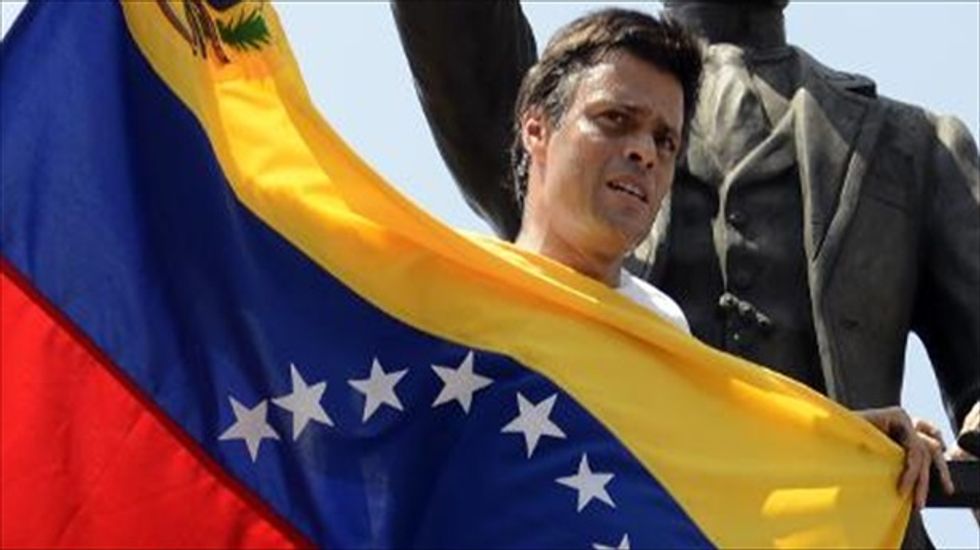 Leopoldo Lopez, an ardent opponent of Venezuela's government, stands at the monument of Cuban independence-era hero, Jose Marti, before turning himself in to authorities, on Feb. 18, 2014 [AFP]

Harvard University announced Friday that it had given an annual alumni achievement award to jailed Venezuelan opposition leader Leopoldo Lopez for his "support of democracy and transparency."

Lopez, who has been held in a military prison since he was arrested in February in the midst of a massive opposition protest rally, is a 1996 graduate of the Harvard Kennedy School's Master in Public Policy program.

"Lopez took a leading role, demanding an open discussion about the constitutional way to deliver the changes that the population demanded," Harvard's alumni board said in a statement.

He was the first recipient to receive the university's Alumni Achievement Award in absentia.

His wife, Lilian Tintori, who is currently on a visit to the United States, traveled to Boston on Thursday to receive it.

Harvard highlighted Lopez's role in the protests and as mayor of Chacao, a municipality of Caracas that he was elected to govern at age 29.

"After finishing his term as mayor of Chacao in 2008 with a 92 percent approval rating, Lopez was favored to become mayor of Caracas," the statement said.

"Amid his growing popularity, the government banned Lopez from running for any elected position."

Created in 1997, Harvard's Alumni Achievement Award honors alumni for "meaningful accomplishments or making a substantial difference on behalf of people, organizations, or governments."

At least 42 people have been killed and more than 800 injured in Venezuela's often violent clashes that began in early February, which have seen police and government troops seek to crush the protests.