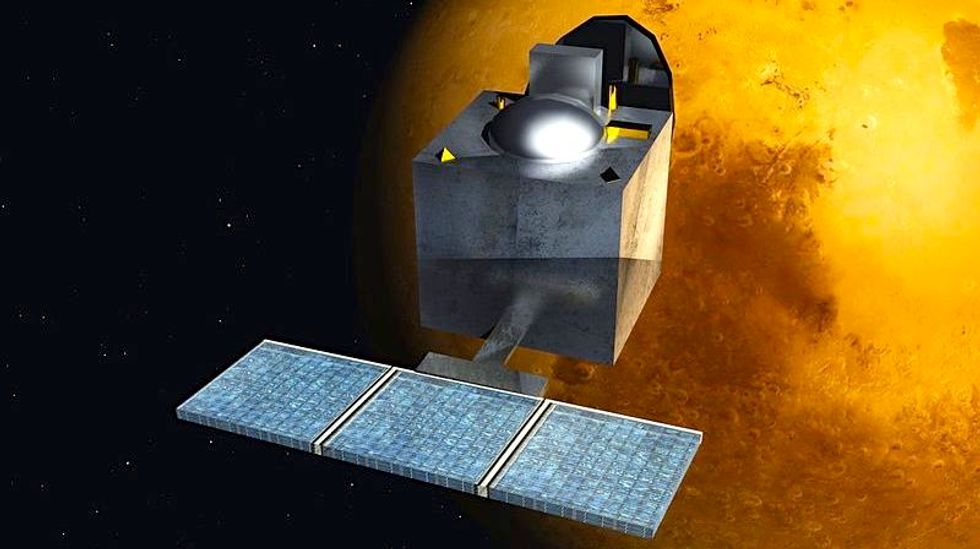 If the Mangalyaan' orbiter mission succeeds in reaching the red planet, it will be a triumph of ingenuity over big spending

On the pitted rural roads running through millions of India's small towns and villages, the jugaad vehicle is a source of peculiar pride.

Often it's a hand-cranked diesel engine crudely bolted on to a flatbed wagon and is used to carry people, steel rods, livestock or sacks of food in places where no public transport exists. It is loud, polluting and not officially roadworthy.

Yet it stands for a quality valued by most Indians: an ability to find a cheap solution to complex problems in a country where infrastructure is poor and technology is still largely unreliable. Jugaad represents a triumph of Indian ingenuity against incredible odds.

India's Mars orbiter, Mangalyaan, is perhaps the country's most audacious and successful example of jugaad so far. A boxy probe built by scientists in just 15 months for the paltry sum of £46m ($75m) – less than the cost of the average Hollywood blockbuster film – Mangalyaan has completed more than half of its perilous journey to the red planet.

It is only a few days behind Nasa's Maven probe, which is propelled by powerful Atlas V and Centaur rockets.

If Mangalyaan enters Martian orbit in September to survey the topography and sniff out evidence of methane, a key sign of life, India will enter the history books as a pioneering nation. It will be Asia's first country to carry out a successful Mars mission. Japan, China and 21 other countries have failed.

At the Delhi offices of the Indian Space Research Organisation (ISRO), a crumbling government building characterised by the usual profusion of with sprouting electrical wires and urine-soaked stairwells, the head of India's space programme explained that Mangalyaan's success on a shoestring budget was down to factors including reusing spacecraft modules, carrying out fewer but more efficient ground tests, and opting for the longer, cheaper route to Mars in the absence of powerful rocket technology.

"We used the launch vehicle that was available to us to the best of its capability, tailoring the launch time and angle to achieve the correct trajectory," said Koppillil Radhakrishnan, the ISRO chairman. "While Mangalyaan was in Earth orbit, we tested its performance and the instruments on board, so this was another advantage."

While European scientists stick to a 35-hour working week, 18 to 20-hour days are common for Indian scientists, according to Radhakrishnan. "Our wages are less, yes, but the rigour of the design and our reliability are second to none," said Radhakrishnan.

Bruce Jakosky, principal scientist on Nasa's Maven, said: "I'm very impressed by India's mission so far. They sent [the Mangalyaan probe] into orbit around Earth and used a series of small rocket motor burns to get into higher altitude. They used the last burn to break free of Earth's gravity to slingshot to Mars. I thought it was a very clever way to do it."

In the recent Indian elections, voters have been mainly concerned about the flagging economy, inflation and corruption in government-run programmes. In the context of widespread poverty, how can India's £600m space programme be justifiable?

Radhakrishnan said ISRO spent a tiny proportion of its budget – 7% – on pure science, such as the Mars mission. Most of its budget is used, he said, on projects that help India's poorest citizens and fight corruption. "If you look at the Indian space programme, it is primarily for the people; 55% of our budget is used for satellites that help more than 100,000 fishermen find their daily catch. We help the government monitor crops, and ground and surface water. Our satellites have helped millions of people escape cyclones in time and we've even helped develop tele-medicine for people who live too far to visit a specialist," he said.

The agency is also using satellites to monitor whether promised government projects are delivered. "When you have a lot of developmental work on paper in rural areas, satellites can certainly be used to monitor progress in a very major way," he said. "If you look at Nasa, you won't find them running the communications satellites for the entire country. People consider India a role model. [Our space programme] did not stay in an ivory tower."

Despite the success of India's Mars probe, most Indians still identify the red planet with its astrological power, not with whether it ever sustained life.

Radhakrishnan, a classical Kathakali dancer and Carnatic music vocalist, said he did not believe in astrology, but he was not averse to making sure the gods and good luck were on his side: Mangalyaan was launched on a Tuesday, mangalvaar or "Mars day" in Hindi.

And a day before theprobe's launch, he sought the blessings of deities at a local temple. "Every person has their own values and beliefs," he said. "I go to temple, to church and mosque. But what is finally important is the power of your mind to face challenges, because the line between success and failure in space is very thin."