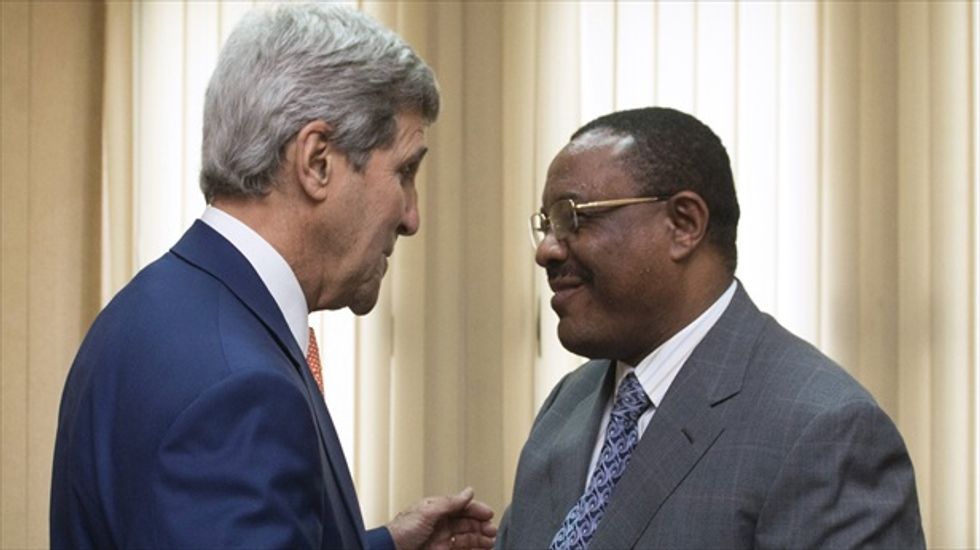 ADDIS ABABA (Reuters) - U.S. Secretary of State John Kerry said he had raised concerns about Ethiopia's detention of six bloggers and three journalists during a meeting with the country's prime minister on Thursday.

The bloggers -- part of a group called Zone 9 that has published articles and appeals criticizing government policies -- and the local journalists were arrested last week and accused of attempting to incite violence.

Rights groups have taken to Twitter and other websites calling for their release and accused the government of trying to silence critics.

Addis Ababa has said the charges relate to "serious criminal activities" and have nothing to do with muzzling the media.

Kerry, whose government is a major donor to Ethiopia, said he raised the arrests during meetings with Prime Minister Hailemariam Desalegn and Foreign Minister Tedros Adhanom in Addis Ababa, where he kicked off an African tour.

He said he met one of the bloggers - Natnael Feleke - during a visit last year and brought up his case on Thursday.

"When I raised him by name in my comments today I am raising a very legitimate concern. We are concerned about any imprisoned journalist, here or anywhere else," said Kerry.

"We believe that it is very important that the full measure of the constitution be implemented and that we should not use the anti-terrorism proclamations as mechanisms to be able to curb the free exchange of ideas," he told a news conference.

Critics say Ethiopia -- sandwiched between volatile Somalia and Sudan -- regularly uses security concerns as an excuse to stifle dissent and clamp down on media freedoms.

They also point to an anti-terrorism law, passed in 2009, which stipulates that anyone caught publishing information that could incite readers to commit acts of "terrorism" can be jailed for between 10 and 20 years.

The Horn of Africa country says the law aims to prevent attacks by separatist rebel movements and armed groups.

The journalists and bloggers made their first appearance in court in Addis Ababa on Sunday and the case was adjourned until May 7 and 8.

Kerry is also due to visit the Democratic Republic of Congo and Angola on his trip which the State Department says will promote democracy and human rights.

Update, 5:18 p.m. EST: The headline was corrected for accuracy