Kareem Abdul-Jabbar rebuts Maher: Donald Sterling's age is no excuse for his racism 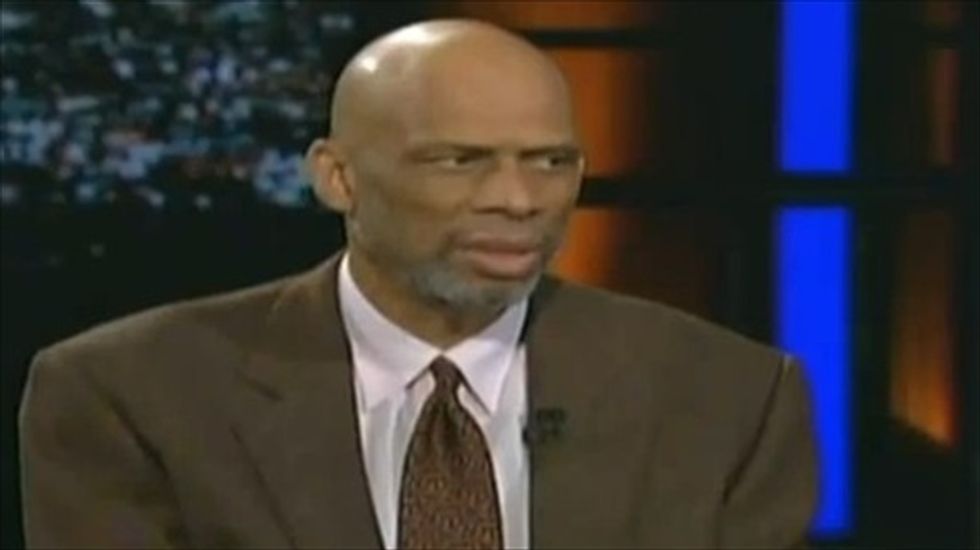 Basketball hall-of-famer Kareem Abdul-Jabbar poked a hole in a rhetorical question Real Time host Bill Maher has brought up regarding racism as a generational issue during an interview regarding Los Angeles Clippers owner Donald Sterling on Friday.

"Do you cut any slack to anybody who's 80 and a racist?" Maher asked. "You hear this a lot: 'Well, he's old.' The same thing you hear about, 'Well, our founding fathers, that was the era they lived in.' Do you think that's an excuse, or [that] we should stop using it as an excuse?"

"I don't think we can use that as an excuse," Abdul-Jabbar said. "His 80 years include the 1936 Olympics, Joe Lewis versus [Max] Schmeling, Jackie Robinson, the integration of the NBA."

Maher did not mention that, in the past, he asked a similar question while defending Paula Deen last year over her own use of racist terms. At the time, Maher said, the slur "ni**er" was "just a word. It's a wrong word. She was wrong to use it. But do we always have to make people go away?"

On Friday, Maher also seemed to question the character of Sterling's reported girlfriend, V. Stiviano. Stiviano has denied being responsible for leaking the recording of Sterling asking her not to associate with Black men at his team's games.

"She says there was not a sexual relationship, or any sort of romantic relationship, and yet she took four cars and an expensive apartment [from Sterling]," Maher said. "I feel that makes her worse than a whore. A whore, that's an honest transaction."

Abdul-Jabbar politely declined to follow Maher's lead, saying he did not know enough about Stiviano's relationship with Sterling to comment. However, in an April 28 column for Time magazine, the former Los Angeles Lakers great said people should be outraged that whoever did leak the recording "will probably get a book deal, a sitcom, trade recipes with Hoda and Kathie Lee, and soon appear on Celebrity Apprentice and Dancing with the Stars."

At the same time, Maher and Abdul-Jabbar found common ground in criticizing what they have described as a feeling of "self-congratulation" permeating the popular condemnation of Sterling's remarks years after he was taken to court for his discriminatory business practices against Blacks and Latinos.

"For over 10 years, we've known about his antics, and some of the things that he's done" Abdul-Jabbar said. "He's done some pretty horrible things to people having nothing to do with race."