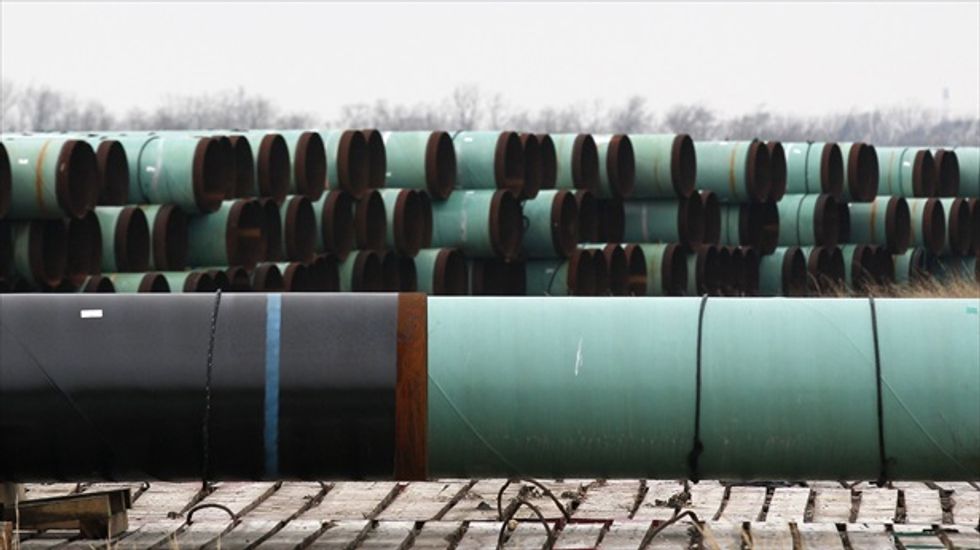 By Timothy Gardner and Thomas Ferraro

WASHINGTON (Reuters) - In the latest effort by U.S. lawmakers to breathe life into the long-delayed Keystone XL oil pipeline, Senator John Hoeven re-introduced legislation on Thursday that would force congressional approval of the controversial project.

Hoeven, a North Dakota Republican, said he has 55 co-sponsors for a bill that would take the power to approve the TransCanada Corp's pipeline out of the hands of the State Department and put it in the hands of Congress.

The tally includes all 45 Republican senators plus 11 Democrats in the 100-member Senate, but is short of the 60 votes needed to clear procedural hurdles.

The Keystone XL pipeline divides President Barack Obama's base between environmentalists, who say it would boost emissions linked to climate change, and union supporters who say it would create thousands of construction jobs.

It was unclear if the bill would even get a vote in the Senate, which is controlled by Democrats, or if any more Democrats could be persuaded to support it.

"I don't know if we will get 60," Hoeven said. "At this point I have a lot of maybes, but I don't know how many will end up voting with us."

In an abrupt turnaround on Tuesday, Senate Majority Leader Harry Reid said he was considering allowing a vote on Keystone in some form, if it could also help push through a bipartisan bill on energy efficiency.

The measure could be added as an amendment to the efficiency bill or remain stand-alone legislation. Senior Democratic aides said on Thursday a decision on how to proceed would likely be made early next week.

Hoeven is working with Senator Mary Landrieu, a Louisiana Democrat who heads the Energy Committee, to gather votes. Landrieu faces a tough reelection battle in November and allowing a vote could help her and other vulnerable Democrats to be on record as pushing hard for Keystone, even if the bill ultimately is vetoed by Obama.

Hoeven also said the wider energy bill, which focuses on increasing energy efficiency through tighter building codes, could get held up if there is no Keystone vote.

"To move forward on energy efficiency, we are going to have to get a vote on Keystone," Hoeven told reporters.

The Obama administration has been considering Keystone for more than five years. The project would bring 800,000 barrels per day of mostly Canadian oil sands petroleum to Texas refineries.

Earlier this month, the State Department said it would delay deciding whether the pipeline is in national interest until a legal dispute is settled in Nebraska. That potentially delayed a decision until after the November elections.

The delay frustrated lawmakers who have failed at previous attempts to make Congress the decision maker on Keystone.

"The president totally changed the situation ... we're pushing for congressional approval. To have another resolution, or another timeline, just doesn't work," said Hoeven.

[Image: Stacks of pipe are stored at the pipe yard for the Houston Lateral Project, a component of the Keystone pipeline system in Houston, Texas March 5, 2014. By Rick Wilking for Reuters.]