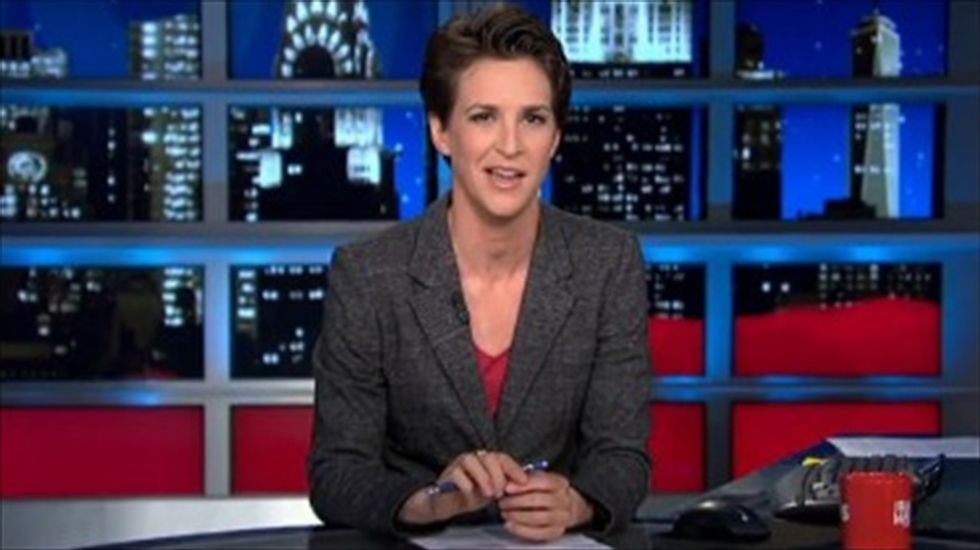 MSNBC host Rachel Maddow said on Thursday that a state commission race in Texas has become more important as the effects of fracking operations in the state become more apparent -- particularly because a Tea Party candidate lost the Republican primary for the group monitoring those operations to an oil and gas industry consultant.

"Turns out, that's the only thing that can beat the Tea Party," she said of Ryan Sitton's campaign for a seat on the state Railroad Commission. While his primary opponent, Wayne Chapman, had been endorsed by Tea Party groups, Sitton won endorsements from a variety of industry executives.

Maddow explained that the commission does not actually oversee railroads, but rather oil and gas industry-related matters, and that on several occasions, it has already sided with the industry despite reports of adverse living conditions for people residing near fracking operations.

For instance, she said, residents in the northern part of the state have reported a huge upswing in earthquakes in the region, which was confirmed by a Southern Methodist University study and attributed in part to "wastewater disposal by injection into deep geologic formations."

On Thursday, the commission also closed -- for the second time -- a nearly four-year-old case involving South Texas residents who discovered their local water supply had become flammable and explosive after natural gas wells were drilled in the area.

In a statement, Maddow said, Railroad Commission staff "determined that the evidence is insuffient" to conclude that fracking-related activities were to blame for the water supply being contaminated by methane and that homeowners should "properly ventilate and aerate their water systems."

"It's hard to imagine how you can more thoroughly ventilate your backyard, which is where this stuff is at a high-enough concentration to catch fire," Maddow said. "But the Texas state government says that's their advice."

"In the raw headlines of Texas, nobody thinks that Steve Brown has a chance," Maddow said. "But at some point, when the water hoses are catching fire, doesn't even Texas start to worry that things have maybe swung a little too far?"

Watch Maddow's commentary, as aired on Thursday on MSNBC, below.