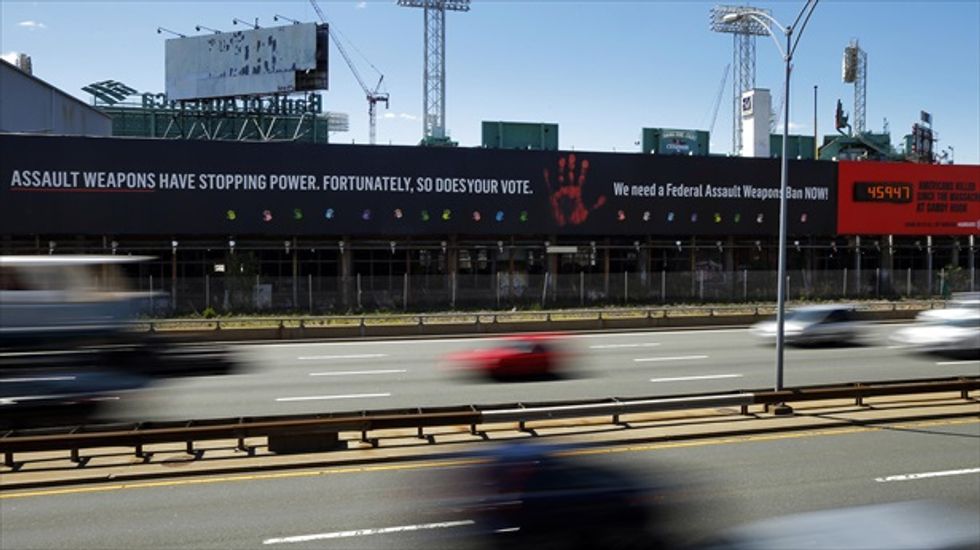 BOSTON (Reuters) - An iconic sign bearing pro-gun-control messages that has hung near Fenway Park in Boston for almost two decades will soon lose its home.

The 252-foot-long (77-meter-long) billboard - which features a counter tracking the more than 45,000 people killed by guns in the United States since the December 2012 attack on a Newtown, Connecticut, elementary school - has been a prominent feature of Boston since real estate developer John Rosenthal ordered the first version for a parking garage in 1995.

He sold the garage, which overlooks the heavily traveled Massachusetts Turnpike, to the owners of the Boston Red Sox a year ago and agreed for the sign to come down in March 2015.

Rosenthal, who hopes to find a new location for the sign before it is removed, said he had put it up with a goal to change the terms of the gun-control debate in the United States.

"You have this historically polarized national debate of unrestricted access to all guns by all people .... versus banning all guns," said Rosenthal, who said he owns a firearm. "That's a very unproductive conversation."

The message on the sign has changed about once a year over its history, with past messages including "We have your president & Congress," printed to resemble a ransom note in a reference to the powerful gun lobby, and "Stop Traffic," aimed at curbing the spread of illegal guns between states.

Rosenthal, whose effort to find a new home for his sign has won the support of Boston Mayor Martin Walsh, said he would like to see national changes in gun laws, including mandatory training for all gun owners, background checks for all gun sales and a ban on military-style assault weapons.

The Boston Red Sox, which bought the building housing the sign, said the original sale agreement included the March 2015 deadline.

"We will work with John in the coming months as he looks for a new home for his billboard," the Red Sox said in a statement.

In the meantime, the billboard's message may not change again before it is taken down, Rosenthal said.

"I'm not sure how much more powerful a message we could create than the number of Americans killed since the massacre at Sandy Hook," he said, referring to the grammar school where a gunman shot dead 26 people, including 20 young children.

[Image: A sign along the Massachusetts Turnpike in Boston May 20, 2014. By Brian Snyder for Reuters]