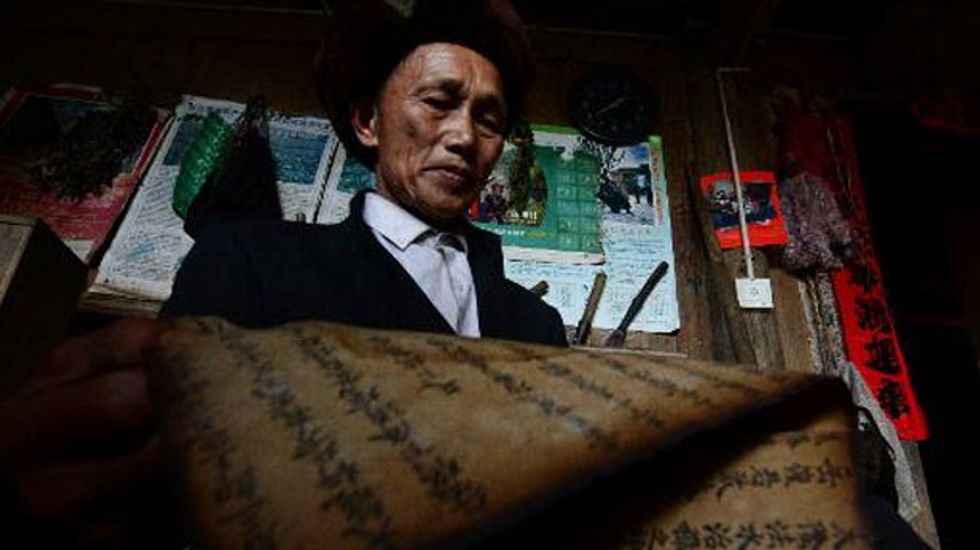 A Chinese shaman resplendent in a dark suit and green cloth hat thumbed yellowing pages said to predict the future -- but mass migration to cities means the prospects for his own profession look bleak.

"To see a spirit, you have to practice the ancient rituals," said Zhao Fucheng, 74, who claims he communicates with the spirit world from his wooden hut in southwestern Guangxi province.

He is one of the estimated thousands of shamans -- locally known as "spirit masters" -- who are called on as healers in a centuries-old tradition among ethnic groups in the region.

"If something bad is going to happen to you soon, and your luck is running out, I can change your luck," Zhao said, who belongs to the Yao ethnic minority.

"If medicine doesn't work, then you need to ask a spirit."

Zhao -- who lives in the remote village of Qiuka, accessible by a dirt track which rises high over mountains patterned with rice fields -- receives a steady stream of villagers who profess to believe in spirits.

"Sometimes if you go to the hospital and see a doctor and it doesn't work, you need to look for a spirit master," said 38-year-old farmer Zhao Jintai, who like many in the village are surnamed Zhao but not related to the shaman.

"Spirits will make you ill, but they won't eat you or anything like that," offered Zhao Deqing, 13.

He admires the motorbikes that older peers drive back from their jobs in nearby towns, and plans to leave the village as soon as school finishes.

When he does, Zhao will join the largest migration in human history -- which has seen more than 300 million Chinese people move to cities over the last 15 years -- and leave the elderly shaman behind.

The shaman Zhao says he specialises in healing and telling fortunes.

"I do some communicating with ghosts, beating drums and blowing cow horns -- I can do the little things," he said.

On a spring morning he agreed to make predictions for a visitor.

Armed with the client's date of birth and wearing reading glasses, he scrutinised a lunar calendar printed in red ink.

Mouthing a series of calculations, he reached for a book he says is hundreds of years old, its crumbling pages lined with Chinese characters.

"When you reach 39, things won't go smoothly for you," he declared, as his increasingly red-faced client nodded.

The shaman pointed his dirt-caked fingernails at the characters, reading aloud and adding: "It's nothing to be scared about".

The Cultural Revolution, a decade of political upheaval launched in 1966 by China's then-leader Mao Zedong, saw violent campaigns against "superstitious" practices in which spirit masters were beaten and abused.

Shamans in Qiuka said they hid their books during the turmoil, retrieving them only when campaigns relaxed in the 1980s.

Even in a tiny village like Qiuka, with just a few hundred residents, several men identify themselves as spirit masters.

"People will look for me if they get sick," Zhao Fukai, a grey-haired man in his 60s said, cradling a thick yellowed tome.

"Ancient people left us this book," he said, adding: "To attract spirits, you need to use blood. It can be a little scary."

But in the mountain villages of Guangxi one section of the population is visible by its absence -- young people.

Nearly all of the remote village's youth leave after graduating middle school, looking for work in cities which pay better than local jobs in farming or forestry.

China is set to add 300 million to its urban population over the next decade, a process bound to leave thousands of villages virtually empty.

Shamans in Qiuka said they feared no one would learn the rites passed down to them.

"You can obviously make much more money working outside the village, you can't earn much doing this," shaman Zhao Jintai said.

He looked at his middle-aged son, who remains in the village due to an industrial accident but claims "not to believe" in the magic practiced by his father.

Yang Shengwen, a local researcher who has studied shamanic traditions in the region, said the practice would suffer as villages empty.

"Shamanism hasn't vanished, but it's a trend we are worried about, especially because of young people going to cities to work," he said.

"The spirits have left, so I communicate with them less," he said.