Missouri death row inmate petitions for his execution to be filmed 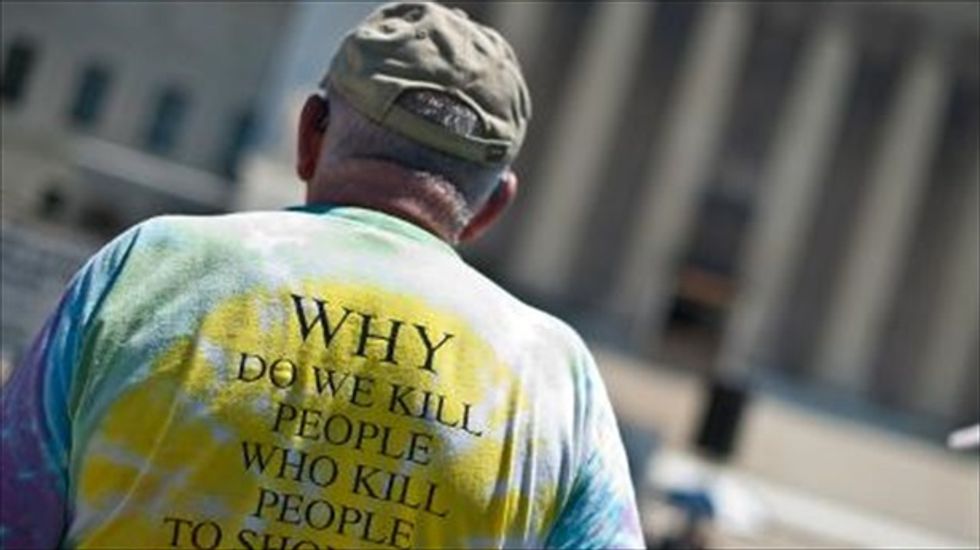 A man wears an anti-death penalty shirt during a vigil against the death penalty in front of the US Supreme Court on June 29, 2013 [AFP]

A death-row inmate scheduled to be put to death Wednesday in Missouri wants his execution to be videotaped so there is evidence it flouts the U.S. Constitution.

Russell Bucklew is set to be executed on May 21 in Bonne Terre for the murder of a love rival and the rape of his former girlfriend, in what would be the first execution in the United States since a botched lethal injection last month in Oklahoma.

Bucklew's attorneys have filed a complaint alleging that the secrecy surrounding Missouri’s lethal injection drugs, combined with a rare medical condition that leaves the inmate with growths on his head and neck, create significant risk that he will die a "tortuous" death.

Such treatment would be in violation of the Constitution's Eighth Amendment prohibiting cruel and unusual punishment.

"During execution, Bucklew will be at risk of choking and suffocating because of his partially obstructed airway and complications caused by his hemangiomas (noncancerous growths)," Zivot said in an affidavit.

"To my knowledge, Missouri's execution protocol provides no contingency for a failed execution, or a situation in which the prisoner starts gasping for air or experiences hemorrhaging."

The lawsuit, which is pending in the U.S. District Court for the Western District of Missouri, says that Missouri's use of unregulated, compounded drugs further increase the risk that Bucklew will suffer a prolonged death.

"Missouri has cloaked its lethal injection protocol in extreme secrecy, refusing to disclose the source of the drugs and preventing complete access to information about the drugs planned for Mr Bucklew's execution," Pilate said.

"All we know is that the drug is compounded pentobarbital, not manufactured. We know nothing about its safety, potency of efficacy, and we have no information about where it's from, how it's made, whether the facility or pharmacist is licensed or even if the drug is tested."

Last month, convicted killer and rapist Clayton Lockett was executed in Oklahoma and died 43 minutes after the start of a lethal injection process that should have taken little over 10 minutes, prompting accusations of torture and renewing debate in the U.S. about the death penalty.