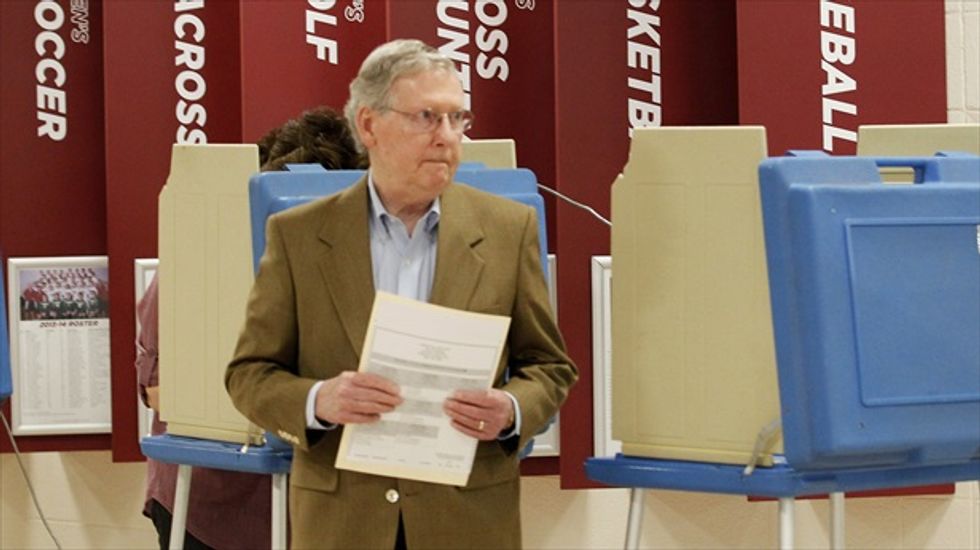 WASHINGTON (Reuters) - Republican Senate leader Mitch McConnell easily dispatched a Tea Party challenger in Kentucky on Tuesday to win nomination to a sixth term, setting up one of November's most expensive and hard-fought Senate races against Democrat Alison Lundergan Grimes.

McConnell's decisive victory over conservative businessman Matt Bevin was one of the highlights of the busiest election night of the year so far, as voters in six states picked candidates for November elections that will decide control of Congress.

Those Senate races could be vital to Republican hopes of picking up the six seats they need to recapture Senate control from Democrats in November, and party leaders have focused on avoiding the sort of divisive primaries that helped cost them winnable Senate races in 2010 and 2012.

McConnell was targeted by Tea Party and conservative groups who accused him of not doing enough to block President Barack Obama's agenda in the Senate, but Bevin suffered a series of campaign-trail missteps, including attendance at a rally supporting cockfighting.

McConnell was projected to win handily in Kentucky by CNN and other media outlets. McConnell will now turn his attention to the match-up with Grimes, the secretary of state in Kentucky who easily won the Democratic nomination and is running even in polls with McConnell.

In Georgia, a crowded Senate primary field makes a July 22 runoff likely between the top two finishers on Tuesday for the right to face off against Democrat Michelle Nunn in November.

The most conservative Tea Party candidates in Georgia are not among the leaders in recent polls, as businessman David Perdue, U.S. Representative Jack Kingston and former Georgia Secretary of State Karen Handel have been fighting for the top spots.

In Oregon, where polling has been less frequent, moderate Monica Wehby is facing a Tea Party-backed state representative for the right to face Democratic Senator Jeff Merkley in the Democratic-leaning state, where problems with the state's healthcare exchange have given Republicans hope of victory.

Other top races on Tuesday include a Tea Party challenge in Idaho to eight-term Republican Representative Mike Simpson, who has been backed by the pro-business U.S. Chamber of Commerce, and in Pennsylvania to seven-term Representative Bill Shuster.