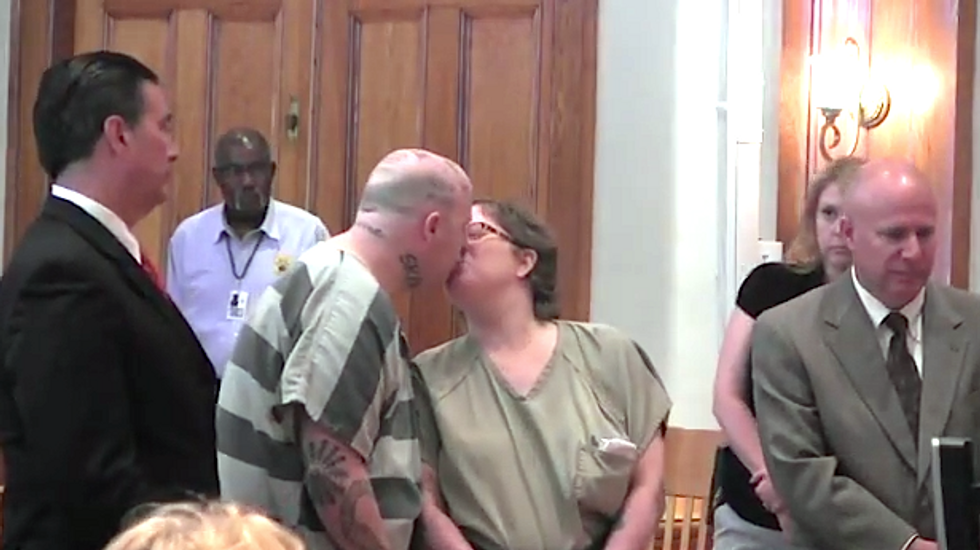 A white supremacist couple from South Carolina who were convicted of killing a registered sex offender smiled and kissed as they were sentenced to life in prison.

Jeremy Moody, 30, and his 36-year-old wife, Christine Moody, pleaded guilty to murder and other charges in the July 21 slayings of Charles “Butch” Parker and his 51-year-old wife, Gretchen Parker.

Jeremy Moody, who has “skinhead” tattooed across his neck, first admitted to the charges, including kidnapping and possession of a weapon during a burglary, and his wife did so minutes later.

Christine Moody smiled as her husband admitted to the charges and then told a judge she’d been promised “fame and fortune” in return for her guilty plea.

Investigators say the Moodys are members of the loosely organized online white supremacist group Crew 41 and decided to kill Parker, who was convicted of third-degree criminal sexual conduct in 1991, because he had taken advantage of a disabled woman.

Jeremy Moody’s attorney told the judge his client suffered from bipolar disorder and schizophrenia, and he said the white supremacist was sensitive to sex abuse due to a family history.

Christine Moody’s attorney said his client had suffered childhood sexual abuse and was raped as an adult by a pedophile.

“She may have an infective instability that causes her to have radical views of society, and the need to have supremacy over her life and society at large,” said her attorney, Derek Chiarenza.

Jeremy Moody believed God wanted him to kill sex offenders, said a doctor who had evaluated him, but added that he was still able to determine right from wrong.

The Moodys were each sentenced to two consecutive life sentences for murder, along with concurrent life sentences and another five-year term related to the burglary and weapons charges. They were not sentenced for kidnapping due to the murder sentences.

After the judge read their sentences aloud, the couple kissed.

Jeremy Moody then shouted out that the sentences were “unfair.”

"Child molesters do not deserve to live,” he said. “They got exactly what they deserved. If I had to do it over again, I'd kill more. See you perverts later! That's what child molesters get.”

Christine Moody said she only repented in court because her lawyer told her to, but she said it was a lie and that she hoped the victims’ family also died.

"Have no regrets, killing that pedophile was the best day of my life," Christine Moody said.

Watch raw video of the sentencing posted online by rockhillheraldonline: