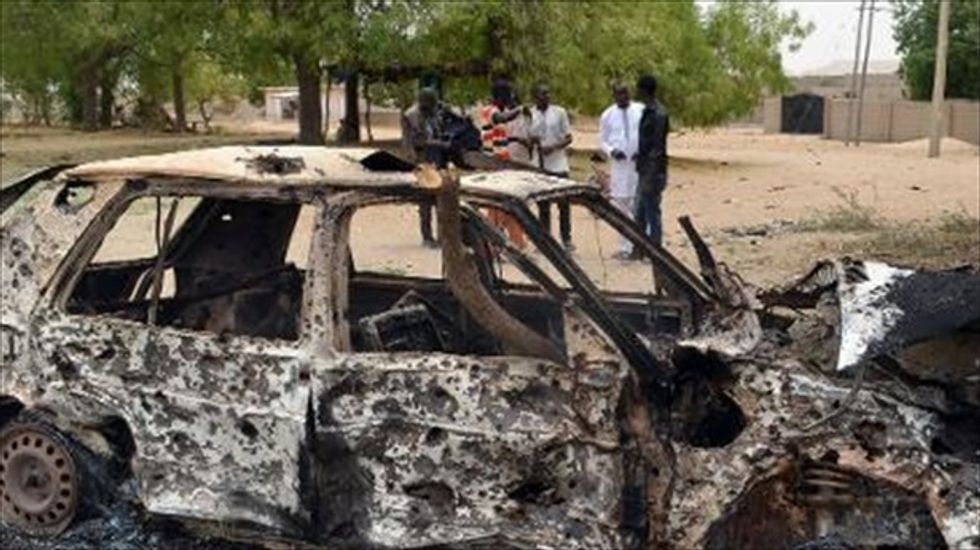 People stand by the wreckage of a car blown up by suspected Boko Haram militants in Maiduguri on March 25, 2014 [AFP]

Nigeria's President Goodluck Jonathan on Friday cancelled a visit to the hometown of more than 200 schoolgirls kidnapped by Islamic militants, provoking fresh criticism of his handling of the crisis.

A senior government official told AFP that Jonathan's trip to remote Chibok in Borno state "was on (the president's) schedule up to this morning" but the visit had been scrapped.

No reason was given but security concerns were reportedly blamed.

Jonathan was now due to head direct to a security summit in Paris on Saturday to discuss the Boko Haram threat to regional stability.

Presidents Barack Obama of the United States and Francois Hollande of France discussed the conference and the hunt for the schoolgirls in a telephone call, the White House said.

The no-show in Chibok heaped further pressure on Jonathan after the United States on Thursday criticised Nigeria's response to the crisis as "tragically and unacceptably slow".

Officials said the safe return of the 223 girls -- still missing a month after they were abducted -- was now one of Washington's top priorities, with specialist U.S. teams, drones and surveillance aircraft involved in the rescue effort.

But French officials categorically ruled out Western military intervention, insisting that the solution should be found by Nigeria and its neighbours.

"Boko Haram represents a risk... for all countries in the region and all heads of state should be aware of that," a French diplomatic source said, singling out Cameroon as a key player.

Boko Haram fighters have frequently launched attacks from Nigeria's neighbour to the east, with whom they have had tense relations in the past over disputed territory.

Republic of Congo President Denis Sassou Nguesso also called on Africa to deal with the crisis itself.

"These are challenges that Africa must rise up to. It must take charge of its destiny rather than wait for support from the international community," he said in a remarks broadcast by national television.

"The time has come for Africa to take a firm position. Be it with regards to Nigeria, Central Africa or South Sudan, Africans must put themselves on the frontline," he added.

As Jonathan headed to the French capital, critics rounded on him for showing a lack of empathy for the distraught families of the girls and also for implying the northeast was beyond his control.

More than 2,000 people have been killed this year alone, most of them civilians, in increasing violence across the Muslim-majority north that has seen churches, schools and entire villages attacked.

"If, as the commander-in-chief of the armed forces, he is afraid to visit Chibok because of security fears, he is simply telling the hapless people in the northeast that he cannot protect them and they should resign themselves to their fate," said Debo Adeniran, of the Coalition Against Corrupt Leaders pressure group.

Lai Mohammed, spokesman for the main opposition All Progressives Congress (APC) said Jonathan had "lost all direction" and the cancellation was "a good example of his government's policy indecision".

"He has clearly abandoned the Nigerian people and Nigerians are conscious of this. Obama went to Afghanistan, so did Bush. I think Jonathan lacks good advisers."

Jonathan is widely expected to seek re-election next year but critics said the hostage drama suggested he was unfit for high office.

U.S., British, French and Israeli teams are in Nigeria to assist the military with its search operation, which has been concentrated in the Sambisa forest area of Borno.

But a potential stumbling block to closer co-operation has been raised over the Nigerian military's human rights record, after well-documented claims of abuses carried out by soldiers.

Defence analysts have pointed out difficulties in the chain-of-command, with junior officers reluctant to make quick decisions on the ground without consulting their superiors.

A reluctance to accept outside help within Nigeria's powerful military could also be a hindrance, while there have been reports that troops are overstretched and under-resourced to be effective.

Disgruntled troops on Tuesday fired shots into the air when the local commander paid a visit to the state capital of Borno, Maiduguri to sympathise with them after a Boko Haram ambush killed some of their comrades.

Six soldiers, including one officer, were killed as they returned from patrol duties in Chibok, the defence ministry said, adding that the commander was not injured by the firing.

Jonathan has requested a six-month extension to a state of emergency in Borno and two neighbouring states in the face of continued violence and the loss of initial gains.

The lower House of Representatives backed the proposal on Thursday while a vote is expected at the upper chamber next week.

But some, including the governor of the one of the states, have questioned the wisdom of further special powers.

The government has ruled out a prisoner swap with the extremists after Boko Haram leader Abubakar Shekau mooted the possibility in a video released on Monday showing the kidnapped schoolgirls.

But the government said it remained open to wider talks on ending the insurgency.

Relatives of the missing girls have called for their unconditional release.

In a rare positive note for Nigeria, one of the alleged masterminds of the April 14 bombing of a bus station in an Abuja suburb that killed 75 was arrested in Sudan.

Army deserter Aminu Sadiq Ogwuche, who served in a Nigerian intelligence unit, was held as he tried to obtain a Turkish visa in the capital, Khartoum.