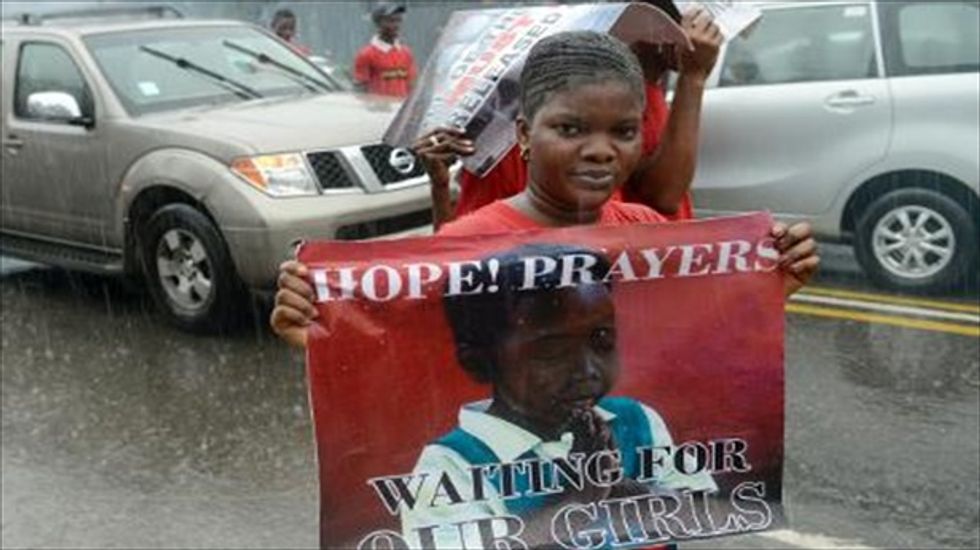 Women carry placards in support of schoolgirls kidnapped by Boko Haram during a demonstration in Lagos on May 14, 2014 [AFP]

Nigeria's President Goodluck Jonathan on Wednesday ruled out the release of Boko Haram fighters in exchange for the freedom of more than 200 schoolgirls kidnapped by the militants a month ago.

Britain's Africa minister Mark Simmonds, who is in Nigeria for talks about the international rescue mission, told reporters that he raised the issue with Jonathan during a meeting in Abuja.

"I did discuss this with the president and he made it very clear that there will be no negotiation with Boko Haram that involves a swap of abducted schoolgirls for prisoners", he told reporters.

Boko Haram leader Abubakar Shekau suggested in a video released on Monday that he may be prepared to release the girls if Nigeria freed militants held in the country's jails.

Interior Minister Abba Moro immediately rejected the plan, telling AFP that the Islamist group, which has waged a deadly insurgency in northeast Nigeria since 2009, could not dictate terms.

A door appeared to have opened to discussions about the girls on Tuesday, when special duties minister Taminu Turaki indicated that the teenagers' freedom could up for discussion.

Simmonds said Jonathan had now ruled that out, he added that the president was still prepared to fulfil his pledge of talking to the extremists about wider issues to end the violence.

The rejection of a prisoner swap came as international powers ramped up the search effort, including with the use of U.S. military surveillance drones and manned aircraft.

The Pentagon said it had deployed the robotic Global Hawk, which flies at high altitude, and the manned MC-12, a propellered plane heavily used in Afghanistan.

Both types of aircraft are "unarmed" and strictly being used for surveillance. Data from the spy planes was not yet being shown to the Nigerians, as Washington was still working out a deal on intelligence sharing.

In London, British Prime Minister David Cameron told parliament a Sentinel surveillance aircraft and a military team would be sent to Abuja to assist in the search.

France, Israel and China are also involved, with the hunt focused on the Sambisa forest area of Borno state, although there are fears the girls may have been split up and taken to neighbouring Chad or Cameroon.

Worldwide interest has been growing in the plight of the missing girls after 276 teenagers were abducted from their school in the remote northeastern town of Chibok on April 14. A total of 223 are still missing.

Jonathan's office said he had received "solidarity calls" from the prime ministers of Algeria, Abdelmalek Sellal, and Pakistan, Nawaz Sharif.

"They both expressed their willingness to share their counter-terrorism experiences with Nigeria and support the ongoing search and rescue operations in any possible way," presidential spokesman Reuben Abati said.

In Paris, President Francois Hollande's office said the leaders of Benin, Cameroon, Niger and Chad would meet with Jonathan in the French capital on Saturday for a security summit.

Representatives from the European Union, Britain and the United States would also attend, the Elysee said.

"The meeting will discuss... how to cut off (Boko Haram) by intelligence, how to train to fight and drive out the killers," Foreign Minister Laurent Fabius added.

"France is not taking anyone's position but our role is to help Africans ensure security because there can't be any solution without democracy, development and security."

Jonathan on Tuesday requested parliamentary approval for a six-month state of emergency first imposed in Borno, Yobe and Adamawa states on May 14 last year.

Lawmakers in the lower House of Representatives began discussing the issue while senators from the upper chamber summoned the ministers of defence and police affairs, military and security chiefs to brief them on Thursday.

By law, the request has to be approved by two-thirds of both of chambers.

The extension request was widely expected but its effectiveness has been questioned, with initial gains from a surge of troops, curfews and cutting the mobile phone networks apparently lost.

Attacks have increased on rural areas leading to mounting civilian casualties. More than 1,500 are estimated to have been killed this year alone.

Former president Olusegun Obasanjo told BBC television: "(Jonathan's) assertion that he will be on top of Boko Haram has not been achieved. The president is overwhelmed. That is the situation."

Security analysts have urged Nigeria to improve its counter-insurgency tactics including more use of intelligence, instead of just conventional means, to defeat guerrilla fighters.

Jonathan said on Tuesday that the security situation was "daunting" in the northeast and that he was concerned by the increasing loss of civilian life.

The governor of Yobe state, however, voiced his opposition to extending the state of emergency and it is likely that Borno and Adamawa will follow suit.

All three states are run by the main opposition All Progressives Congress party, which is eyeing power in next year's general election.