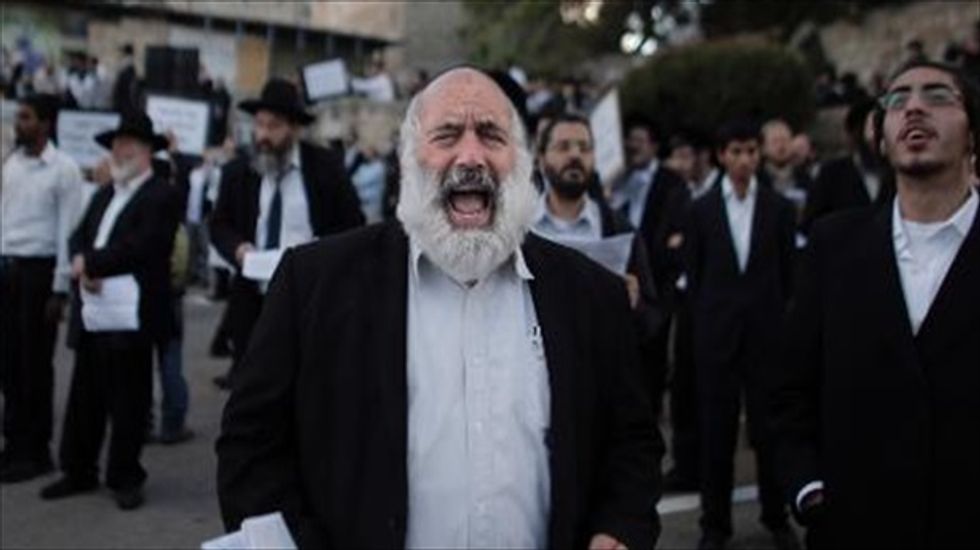 Ultra-Orthodox Jewish men protest against Pope Francis' upcoming visit to the Holy Land, on May 12, 2014 in the Old City of Jerusalem (AFP)

Hundreds of ultra-Orthodox Jews gathered Monday near the reputed scene of Jesus's last supper in Jerusalem demanding that Israel keep sovereignty over the site where Pope Francis will celebrate mass.

The pope will visit the Holy Land from May 24-26 and before returning to Rome is set to hold a mass in the site known as the Upper Room or Cenacle, on Mount Zion near the walls of the Old City.

Jews revere the site as the tomb of King David, which is on the ground floor of the same building. The site is also important for Muslims.

"As soon as they touch the 'status quo' of this place, bad things will happen," said rabbi Avraham Goldstein, accusing the Israeli government of wanting to hand the Upper Room over to the Vatican.

Sovereignty over the Cenacle, which was renovated by Franciscans in the 14th century before the group was forced out, is a highly sensitive issue.

It is currently part of negotiations between Israel and the Vatican which hopes to recover the site.

Tradition says it is where Jesus had his last supper with the disciples, before his arrest and crucifixion.

It is also where the Gospels say the Holy Spirit descended at Pentecost, 50 days after Easter.

Israeli President Shimon Peres told an Italian newspaper during a visit to the Vatican last April that a compromise had been reached on the Cenacle, and that "99 percent" of the issues concerning the site had been addressed.

However, no official agreement has been announced.

"When 'the crusaders' come here making the sign of the cross and all kinds of rituals, this place will become idolatrous for us, and we will not have the right to pray there any more," ultra-Orthodox Jewish protester Yitzhak Batzon told AFP.

Ultra-Orthodox protesters are planning another demonstration there on May 22 -- just three days before the pope is due to arrive in Jerusalem.