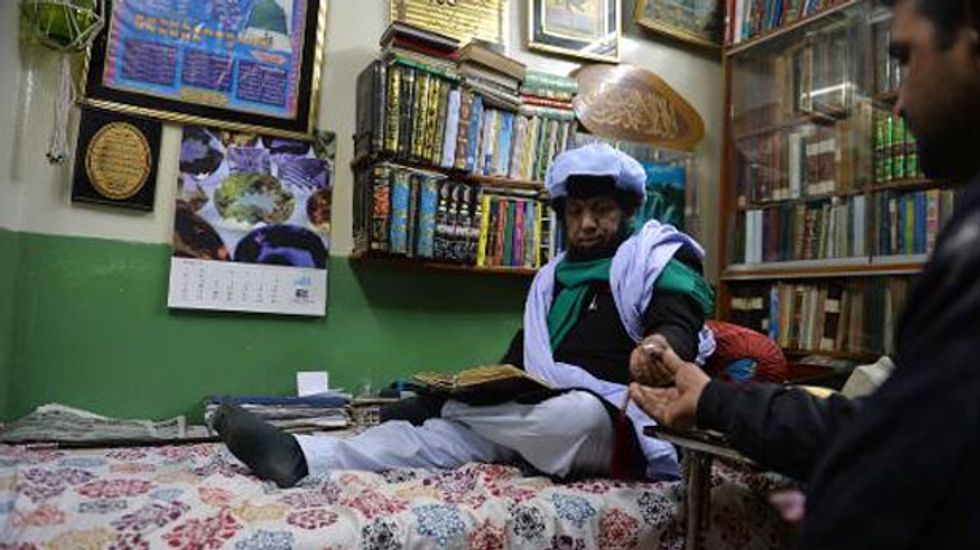 From winning the heart of your beloved to getting a promotion at work, Pakistan's practitioners of black magic say there is nothing they can't help you achieve -- for a humble donation.

The centuries-old practice is rooted in mystic Sufi lore and has traditionally been the domain of pirs (saints) and aamils (sorcerers).

A cure-all to some and for others a scam that preys on people's superstitions, the sorcerers continue to thrive despite the disapproval of some hardline schools of Islam.

"Contact us immediately to get all the jobs done while sitting at home," screams one classified advert featured in several newspapers.

It offers an answer for all manner of problems: "failure in love, overcoming the boss, getting a job transfer, foreign travel, lack of marriage proposals and a chance to win a lottery."

Pir Ali Hussain Shah, the 55-year-old "saint" referred to in the notice says the correct incantation from the Koran is key to working miracles.

"Disease, financial or family problems or any other problem of the world, can be solved in one night of recitation," Shah told AFP.

Shah said he was working for the good of humanity and providing the service on a charitable basis -- though he admitted satisfied followers were generous with their gifts.

"People who are happy with my work and get solace from their worries, themselves come and give offerings in cash and kind which I spend on langar (charity food handouts)," Shah said.

The expensive Sunday newspaper ad was paid for by one such follower grateful for Shah's help in getting married to a man in Britain despite her parents' opposition, he said.

"The girl's parents did not want her to marry a British-Pakistani man she liked. She contacted me and I did the recitation and told her that within seven days she will get married and it happened."

Shah and his ilk use a number of traditional practices, including writing verses of the Koran on paper and folding them into various patterns to be worn around the neck as a talisman.

Other methods include reciting the Koran and then blowing onto water or rosewater which a follower then drinks.

Inscribed "spells" of black magic script can also be dissolved into liquids and used as a curse to be given to one's enemies, while some sorcerers ask their followers to sacrifice a black hen or goat to ward off evils.

Visiting the shrines of ancient Sufi saints and offering alms to the poor -- and cash to the custodians -- are very popular in Pakistan, where many believe they will help get their prayers answered.

For 45-year-old Razia Bibi, a housewife from the city of Rawalpindi, visiting her saint Syed Izhar Bokhari at his astaana (Sufi abode) is an important ritual she believes ensures her family's health and wellbeing.

"It surely is effective, I am coming here for the past 25 years and I have come out of so many troubled situations in my life," the black-veiled Bibi told AFP.

Not everyone approves. Mufti Tehsinullah of Islamabad's radical Red Mosque said that while the practice of black magic was officially recognised in the Hadith -- Islamic texts relating to the life of the Prophet Muhammad -- it was wrong to exploit it.

"Practising black magic and making it a business is against Sharia and the fake practitioners have in many cases abused young girls who go to them for help in getting proposals," he claimed.

It's not just the poor and so-called simple people who believe in the dark arts.

A remarkable full-page advertisement appeared in national newspapers recently, signed by the head of Pakistan's only brewery, accusing his brother-in-law of turning his mother against him through "witchcraft and black magic".

And there have been some notorious cases of abuse. In 2011, long-haired, bushy-bearded sorcerer Mohammad Saleem was arrested for duping hundreds of women into having sex with him in the hope of conceiving a boy.

He was sentenced to five years in jail and fined 10,000 rupees ($100 dollars), but in 2013 he was freed after the only woman who came forward to testify retracted her statement.

There is also little legal redress available for those left unsatisfied by their sorcerer's efforts.

Taxi driver Irfan Ahmed, 26, sought help to win the hand of a woman he had fallen in love with -- with no success.

"I have tried these problem solvers and they all are fake. I lost thousands of rupees on them to make my marriage possible, but she got married to someone else and I am still a bachelor," he said.

"I did not go to police as it would be too embarrassing to explain and also police are not of much help in these matters."