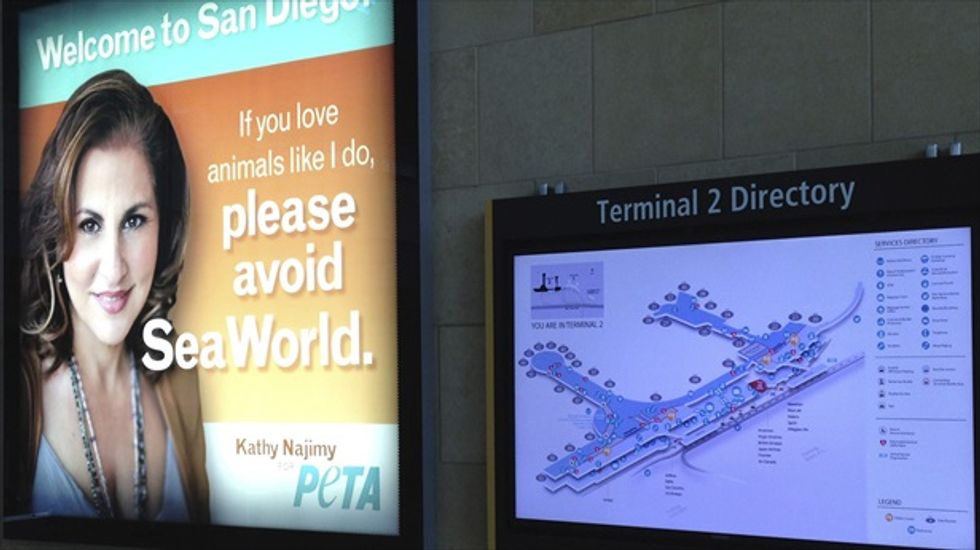 The airport, which had balked at displaying the ad, agreed to do so as part of a legal settlement after an animal rights group sued in March accusing the airport and the company that handles its advertising of infringing on its free speech rights.

"There appears to have been viewpoint discrimination, and we are glad that issue was resolved," said Sean Riordan, senior staff attorney for the American Civil Liberties Union of San Diego and Imperial Counties, which helped represent People for the Ethical Treatment of Animals in the lawsuit.

Officials at San Diego International Airport, without admitting wrongdoing in a legal settlement filed this month, agreed to allow the PETA advertising poster to go up this week in the airport's baggage claim area.

The ad welcomes visitors to San Diego and features film and television actress Kathy Najimy, a San Diego native. "If you love animals like I do, please avoid SeaWorld," the script says.

The legal tussle over the advertisement comes as SeaWorld faces scrutiny over conditions for its killer whales, in large part due to last year's broadcast of the documentary "Blackfish," which tells the story of an orca that killed a trainer at SeaWorld's park in Orlando, Florida, in 2010.

A California Democratic lawmaker has said he was inspired by "Blackfish" to introduce legislation proposing to ban SeaWorld from using killer whales to perform tricks in famed "Shamu" shows at its California park. The bill was effectively killed last month, as other lawmakers called for more research.

SeaWorld spokesman David Koontz called the ad a publicity stunt, and said the park's animals were healthy and happy and that SeaWorld was committed to ensuring their well-being.

"There is no organization more passionately committed to the physical, mental and social care and well-being of animals than SeaWorld," he said.

Representatives for the airport did not immediately return calls on Thursday.

An official with JCDecaux, which handles advertising at the airport, initially told PETA its ad featuring Najimy could not go up because it violated policies against "disparaging" and "demeaning" content, according to the lawsuit.

[Image: A People for the Ethical Treatment of Animals (PETA) poster featuring actress Kathy Najimy is pictured at the San Diego County Regional Airport, in this handout photo taken May 21, 2014, courtesy of PETA. REUTERS/PETA/Handout via Reuters]