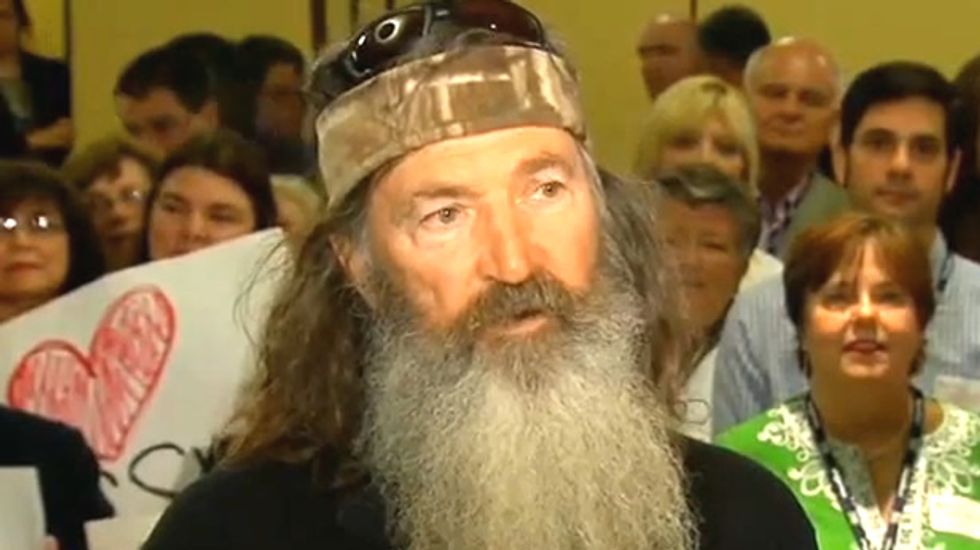 After Jindal's speech, the Times-Picayune reported, former vice presidential candidate and half-term Alaska governor Sarah Palin came on stage to introduce Phil Robertson. "I was just in the neighborhood and I heard a duck calling," she said. "It was mixed up with a little tune of common sense -- and some major going rogue."

Robertson began by apologizing for his attire -- he was wearing camouflage pants and a polar fleece -- by saying that "I have on the very best clothes I own. I never got around to buying a suit. Louisiana Tech gave me one for traveling ball games i dont know whatever happened to it -- I just never really found the need for one. I've never owned a ring or a watch or a cell phone. And I've never turned on a computer in my life."

When the crowd laughed, he pretended to be offended. "I'm a C+ man -- smarter than half of you! And some of you are saying are you some kind of idiot. Actually I'm a multimillionaire and I'm famous so shut up and sit down."

As to the question of why he was speaking at the Republican Leadership Conference at all, he said that "I'm not a political person I guess the GOP may be more desperate than I thought to call somebody like me."

Robertson then quickly turned serious, addressing the separation of church of state. He quoted John Adams, who wrote that "[i]t is religion and morality alone which can establish the principles on which freedom can securely stand...You lose your religion, you lose your morality, and you lose your freedom."

He then quoted James Madison, who wrote that "[r]eligion is the basis and foundation of your government," before complaining about the exclusion of the Bible from public school classrooms.

"Education is useless without the Bible," he said, before speculating that many crimes could be prevented if the Bible was allowed back into the classroom. "If children were taught to 'love thy neighbor,'" he said, maybe they wouldn't consider shooting up their schools.

"Separation of church and state?" he asked. "I'm telling you right here what the founding fathers said. Does it sound to you like separating God almighty from the United States of America?"

He concluded by giving the GOP advice on to how to turn the country around: "Get godly!"

After his speech, Robertson sat down with Fox News's Sean Hannity for an interview, which can be viewed in its entirety below.