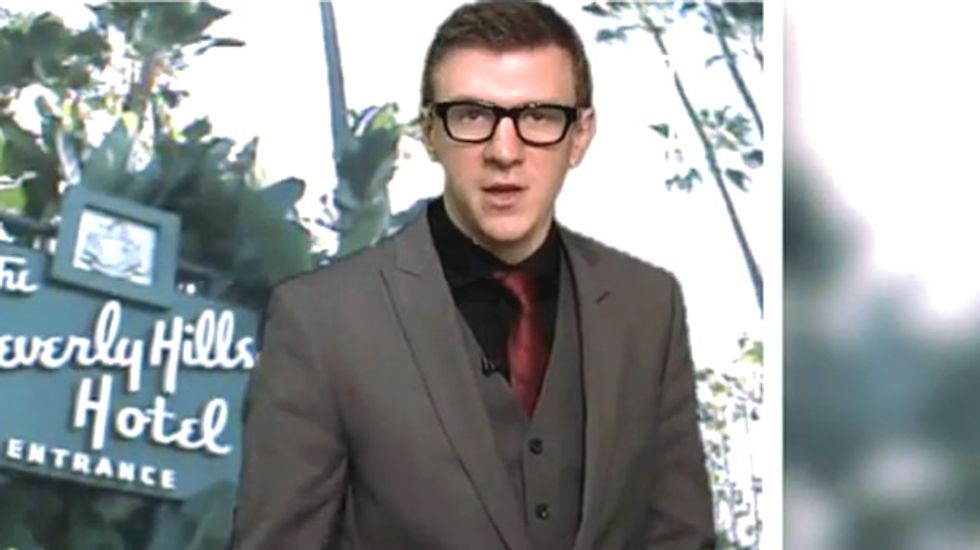 According to O'Keefe, the film "shows the dark side of Hollywood's environmental movement. Hollywood is willing to take and conceal money from Middle Eastern oil interests in order to advance their cause of destroying American energy independence."

In the film, O'Keefe hired an actor to play "Muhammad," an oil baron who wishes to fund an anti-fracking movie in order to "help his bottom line."

"If Washington D.C. continues fracking, America will be energy efficient and then they won't need our oil anymore," he tells two producers during a lunch at the troubled Beverly Hills Hotel. The producers -- husband and wife team Josh and Rebecca Tickell -- are known for their environmental movies, including Fuel, which won the Audience Award for Best Documentary at Sundance in 2008.

The other two people at the table are Ed Begley Jr. and Mariel Hemingway. Begley told The Hollywood Reporter that he only agrees with "Muhammad" because he was told to be polite and could barely understand what the man said.

"Josh is a friend, and he said if I showed up at this lunch, he would get money from a backer. He wanted some Hollywood people involved, and I saw the other one was Mariel Hemingway. I basically sat there and didn't say much. Josh said to just nod and agree, so I guess I did that," he said.

Hemingway appears to collude with "Ad Executive Steven Sanchton," who wants assurances that knowledge of where the funding of the anti-fracking film comes from "doesn't go farther than this table."

In recorded telephone calls, both Josh and Rebecca Tickell discuss how "the enemy of my enemy is my friend," and agrees to accept the oil baron's money because "money to us -- it's money, we have no moral issue."

They acknowledge that "if people think the film is funded by Middle Eastern oil, it will not have that credibility," then assure the representative of "Muhammad" that the funding will remain secret. "We're confident that we can keep this zip-locked. You know, tight. Tight. Air-tight forever," Josh Tickell said at one point. "If we don't protect who is kind of funding this thing -- if we have to disclose that or that becomes a necessary part of it, the whole enterprise will not work."

In the footage of the lunch, however, the couple is clear that they would not make a film that does not "fall within the parameters of what it is that we're committing to," Rebecca Tickell said, "like we wouldn't make a pro-fracking movie if the oil company showed up and asked us."

Josh Tickell denied to The Hollywood Reporter that he had behaved inappropriately. "To be clear, we flat out deny any implication of impropriety," he said. "Had an offer been made, significant due diligence would have been conducted. The sad part is, O'Keefe casts a bad light on Muslims at large as if they're a bad group of people."

The couple also created a response video late Tuesday night, in which they admit to having been "punked" by O'Keefe and his crew. "I'm about to tell you a story of the lengths that some people will go to discourage the transition to green energy," he says in the video.

"If it wasn't so serious it might even be kind of funny."

Watch a clip from Expose: Hollywood's War on U.S. Energy below.