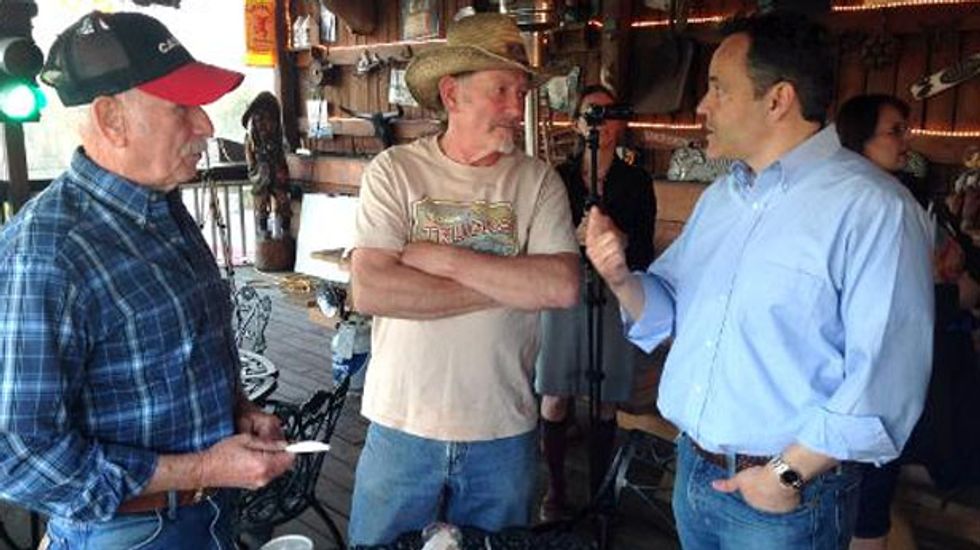 When one of President Barack Obama's most conservative congressional foes is branded a leftist by the Tea Party, the resulting spat is nothing short of a Republican civil war.

In the run-up to congressional elections in November, the vicious battle for the soul of the party is raging in an unlikely locale: the state of Kentucky, deep in the American heartland, where voters are more used to seeing Republicans beat up on Democrats than on each other.

It features Mitch McConnell, the US Senate's genteel but politically wily minority leader, first elected 30 years ago, and Matt Bevin, a little-known businessman who has launched a rebel campaign to oust the 72-year-old from his Washington perch.

Several party battles are similarly simmering across the country, launched by a new generation of anti-establishment candidates, political novices determined to rid Congress of apparatchiks they say deserve no more consideration than their Democratic rivals.

"I don't think Mitch McConnell is a conservative," Bevin told AFP in the parking lot of a Kentucky bluegrass country restaurant before he went in for a meet-and-greet.

"I think he is a progressive, someone who believes bigger government is the answer."

Bevin thinks some party stalwarts see Washington as their fiefdom, "of and by and for them, and they're trying to hijack the process."

He says "career politicians" of both parties that have lost touch with the constituents who sent them there are "big-corporate, big-government, big-labor cronies that are all greasing each other's wheels."

The lot is full of pick-up trucks, and a couple of dozen patrons are waiting in the restaurant. His speech inside is a hit with voters who have come to hate Washington, the national capital some 570 miles (915 kilometers) and a world away from rural Sligo hamlet.

For many here, McConnell's career has been one long string of unnecessary compromises.

"He gives Obama everything he wants. It's just time for him to retire," sneers a craggy-faced man in his sixties who calls himself Joe.

Throughout his career, Kentucky's political godfather McConnell has never had serious primary rivals. But the so-called "Tea Party" wave that crested in 2010, with several dozen hardcore conservatives winning seats in Congress, sent a shiver through the establishment.

Yet the Tea Party -- a loose collection of small-government, low-tax, deficit-reduction populists with backing from billionaire donors -- has never dared aim as high as McConnell.

This year it's different. National activist groups affiliated with the Tea Party, including Freedom Works and the Senate Conservatives Fund, have already spent more than a $1 million against him.

McConnell has tossed up roadblocks to Obama's agenda at every turn, including on climate change, immigration, and gun control. But Tea Partiers accused the top Senate Republican of treason for not blocking passage of a law that raised the debt ceiling last October, denouncing his vote as a green light to higher deficits.

Bevin's challenge forced McConnell to start spending from his war chest to counter a fusillade of attack ads. His team even pays a woman to track Bevin with a video camera in the event he makes any public gaffes.

Backed by a powerful business lobby and party cadres, McConnell has promised that Tea Party challengers would be "crushed" and polling suggests the challenger faces an uphill battle.

But in states like Kansas and Mississippi, incumbents are at risk.

In a luxury hotel in Lexington, McConnell told 200 well-heeled Republicans gathered for the Fayette County Ronald Reagan Day Dinner that being politically uncompromising was counter-productive.

"In order to make a difference, you have to win. Winners make policy and losers go home."

But the Tea Party is already gearing up for its next big challenge: 2016's Republican presidential primaries.

To take back the White House, Republican leaders intend to enforce party unity, not abide an ultra-conservative insurgency.

2014, it seems, is the first step in crushing the rebellion.