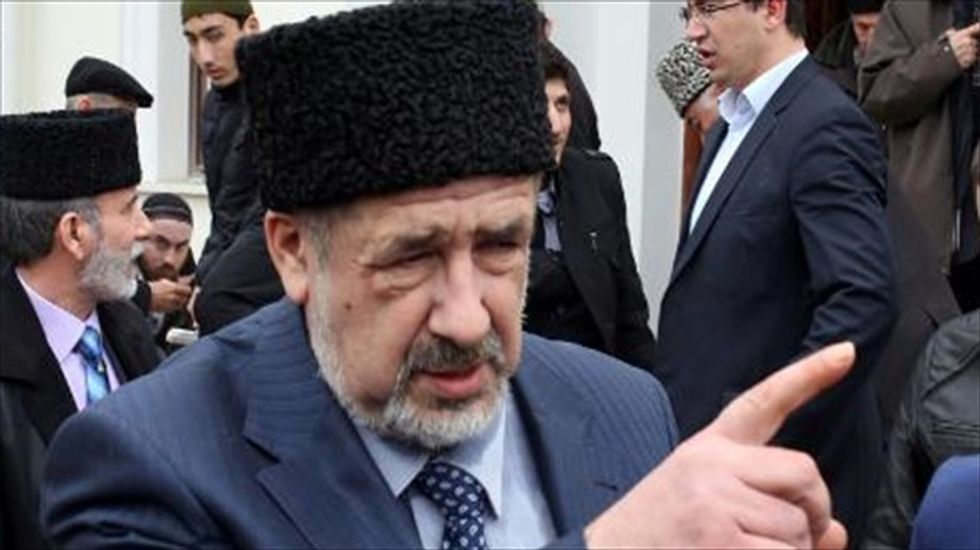 Refat Chubarov, chairman of the Mejlis (assembly) of the Crimean Tatar People, speaks as he leaves a mosque in Simferopol on March 7, 2014 [AFP]

A leader of the Crimean Tatars, a Muslim minority group on the Moscow-controlled peninsula, said Monday that the new Russian authorities had threatened to prosecute them for "extremism".

The leader of the ethnic minority's assembly, known as the Mejlis, Refat Chubarov, said the chief regional prosecutor had on Sunday read him an official warning to stop "extremist activities".

The warning came after hundreds of pro-Kiev Tatars clashed with the region's authorities at the weekend because of a ban on their spiritual leader visiting Crimea.

Chubarov said he feared that the authorities planned to prosecute him.

"I know that a criminal case will be opened against me today," he told AFP, expressing fears that the authorities were gearing up to launch "repressions" against Tatar activists.

"There will also be attempts to declare the Mejlis an extremist organisation," he said.

In March, Crimea's 300,000 Tatars, who make up around 12 percent of the peninsula's population largely boycotted a disputed referendum in which the majority voted to join Russia.

Crimea's regional prosecutor, Natalia Poklonskaya, has warned the community that its assembly will be banned if the Tatars continue with "extremist activities," according to the Mejlis.

A Turkish-speaking Muslim group, the Tatars were accused of collaborating with Nazi Germany during World War II and deported to Central Asia under Stalin.

Nearly half of them died of starvation and disease.

They began returning to Crimea under the last Soviet leader Mikhail Gorbachev and became Ukrainian citizens after the country's independence in 1991.

Clashes broke out Saturday after the local authorities banned the spiritual leader of the Tatar community, Mustafa Dzhemilev, from visiting the peninsula.

Dzhemilev's supporters scuffled with police and broke through a border check point in a failed attempt to help him cross into Crimea.

Dzhemilev, who is also a Ukrainian lawmaker, is a Soviet-era dissident who dedicated his life to fighting for the rights of his people and commands huge respect among the Tatars.

He became a persona non grata for Crimea's authorities after he told a session of the UN Security Council in March that his people were afraid for their lives and that 5,000 had already fled the peninsula.

Dzhemilev on Monday dismissed the growing pressure against the community, saying if the authorities banned the assembly it would go underground.

"We already saw this under the Soviets when the whole of the powerful KGB machine worked against the Crimean Tatars," he told AFP from Kiev.

"Despite the repressions, we functioned then and we will find a way to function now."