Russian Proton rocket falls back to Earth after engine failure 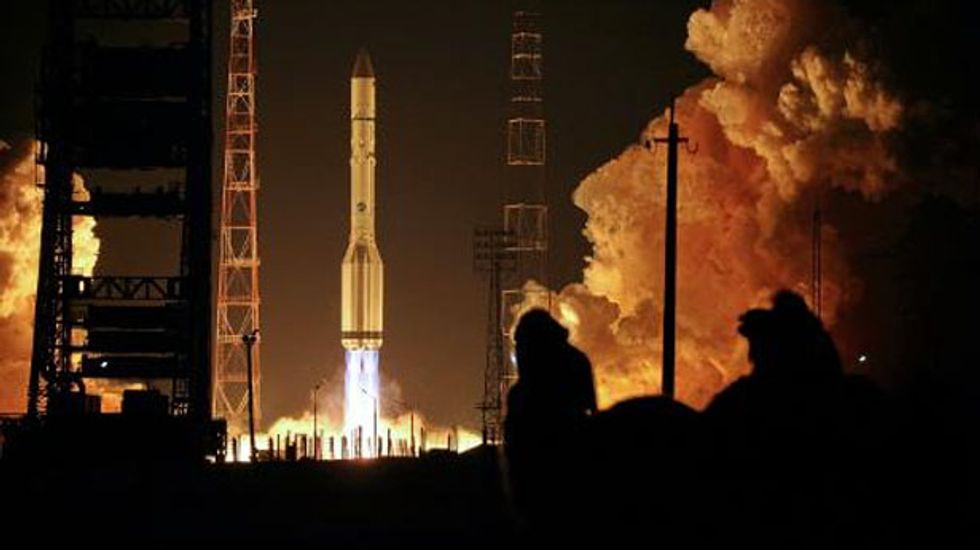 A Russian Proton rocket carrying an advanced communication satellite fell back to Earth on Friday shortly after liftoff in the latest accident to hit the country's once-proud space industry.

Russian space officials said the rocket's control engine failed 545 seconds after it took off from the Baikonur space centre that Moscow leases in Kazakhstan.

State television showed the Proton and its Express-AM4P satellite reported to be worth $29 million (21 million euros) burning up in the upper layers of the atmosphere above the Pacific Ocean.

"We have an emergency situation," Channel One television showed a Russian flight commentator as saying.

"The flight is over," the commentator said.

Russia's Roscosmos federal space agency said it had formed a special commission "to analyse the telemetric data and discover the reasons for the emergency situation."

Channel One said the satellite -- built by Airbus Group's Astrium corporation -- was meant to provide Internet access to far-flung Russian regions with poor access to communication.

The RIA Novosti state news agency described it as "Russia's most powerful and advanced communication satellite".

Roscosmos said it was grounding the Proton -- a workhorse of Russia's space industry that earns tens of millions of dollars a year by launching Western and Asian satellites -- during the investigation.

Russia sacked its previous Roscosmos chief Vladimir Popovkin in October 2013 after less than two years on the job because of a string of failed launches and other embarrassing incidents to the country's underfunded but historic space industry.

New Roscosmos head Oleg Ostapenko has been charged by President Vladimir Putin with overhauling the entire sector with billions of dollars in extra state funding.

The upgraded M version of the Proton has experienced a string of recent problems that have threatened Russia's reputation as a reliable but cost-effective alternative to US and European rockets.

The Proton-M was last grounded in July 2013 when it crashed back to Earth with three Russian-made Glonass navigation satellites on board.

The incident dealt a black eye to the Kremlin because it has touted the Glonass as a superior alternative to the US Global Positioning System (GSP) that was unfurled years before the Russian project.

A previous space commission said that failure was caused by the improper installation of three of the Proton's six angular velocity sensors.

Russia also grounded the Proton in August 2011 after the malfunction of an upper booster that is additionally employed in the launch of military satellites.

The same booster -- called Briz-M -- was used by the Proton that failed on Friday.

Moscow fetes its rockets and still celebrates its ability to trump the United States during the Soviet-era space race by putting the first man in orbit in 1961.

It is also a source of national pride that has featured prominently in Kremlin politics.

The recent chill in East-West relations set off by the crisis in Ukraine prompted Russia to warn that it may prohibit the United States from using one of its newest rockets in the launch of its military satellites.

Moscow also hinted that it may turn down Washington's request to extend the lifespan of the International Space Station -- an international project that relies on the Soyuz system for manned launches -- by four years through 2024.