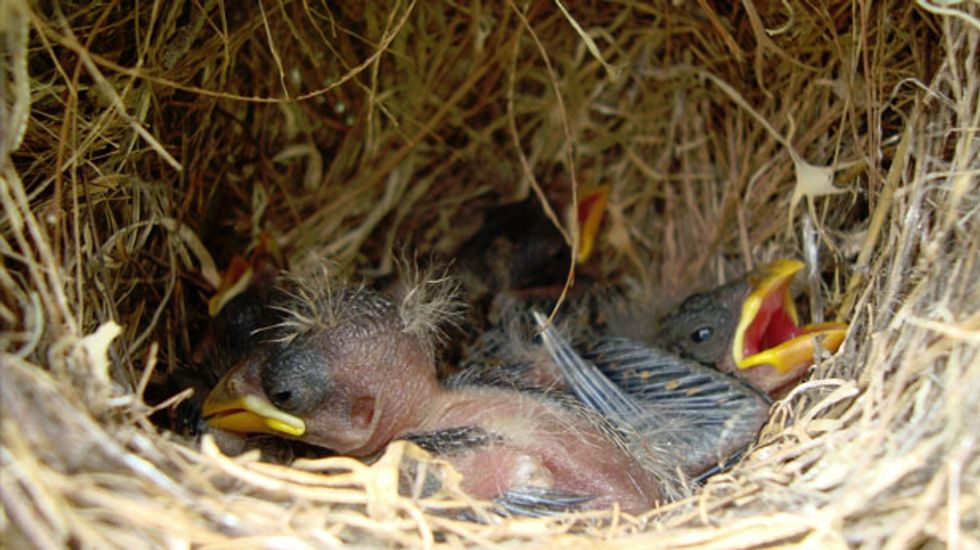 WASHINGTON (Reuters) - Which nest is best to eliminate a blood-sucking pest? Scientists seeking to help endangered Galapagos Islands birds survive a deadly parasitic threat put that question to the test.

Researchers on Monday described a new method to assist Darwin's finches in combating the larvae of parasitic flies responsible for killing numerous nestlings of the famous birds that helped inspire Charles Darwin's theory of evolution by natural selection.

They placed cotton balls treated with a mild pesticide near where the birds were building their nests. The birds picked up bits of the cotton with their beaks and incorporated it into their nests, killing the fly maggots while causing no harm to the birds or their offspring, the researchers said.

The pesticide was permethrin, used to treat head lice in people. It also kills flies of the species Philornis downsi that was apparently unwittingly introduced by people to the Galapagos Islands and has been blamed for population declines among Darwin's finches, including two endangered species.

"This parasite is not historically found in the Galapagos Islands and, therefore, Darwin's finches have not had enough time to evolve defenses against the parasites," said University of Utah biology professor Dale Clayton, one of the researchers.

"In some years, 100 percent of nestlings die as a direct result of the parasites. It is critical to find a way to control the parasites in order to help the birds," Clayton said.

The flies probably came aboard ships or planes arriving at the Galapagos and were first noticed as a problem in 1997. The flies lay eggs in bird's nests. When they hatch, the parasitic larvae feed on the blood of nestlings and their mothers.

Finding a method to control the flies has become a top priority for scientists studying the Galapagos birds.

"There are currently no methods to effectively combat the parasite," said University of Utah biology doctoral student Sarah Knutie, another of the researchers.

'SITTING ON MY PORCH'

A casual observation at a research facility in the Galapagos led to the idea of helping the birds help themselves.

"In 2010, I was sitting on my porch at the Charles Darwin Research Station and noticed Darwin's finches continuously landing on our laundry line. The birds were pulling frayed cotton fibers from the line and presumably taking them back to incorporate into their nests," Knutie said.

"Since we know that permethrin is effective at killing the parasite, I wondered if Darwin's finches could be encouraged to take cotton balls treated with permethrin back to their nests to kill the parasite," Knutie added.

In experiments on the Galapagos' Santa Cruz Island, the researchers placed wire-mesh dispensers for cotton near where finches were building nests. They found that all four species of finches that nest there readily used the material in nests and were just as apt to use treated cotton as untreated cotton.

When the birds used treated cotton in their nests, this "self-fumigation" technique eradicated at least half the maggots, the researchers found. In nests that contained at least a gram of treated cotton, all but one nest was parasite-free.

The nest that was the lone exception had four maggots compared to an average of 30 in nests with no treated cotton.

Darwin's finches, named for the British naturalist, are 14 species of birds that live on the Galapagos Islands, made up of 19 Pacific islands located about 600 miles (1,000 km) west of Ecuador. Darwin, who visited the islands in the 1830s, was struck by the diversity of the finches including such traits as beaks that varied depending on their local food source.

Darwin felt this suggested that the birds adapted to their environments, leading to the notion that species are not unchanging but instead evolve over time.

Knutie said the findings have important implications for helping critically endangered species of Darwin's finches including the mangrove finch and medium tree finch. She noted that the mangrove finch has fewer than 80 individuals left, making it one of the world's most endangered bird species.

The same method could be used elsewhere to help birds and perhaps even prairie dogs affected by parasites, Knutie said.

The research was published in the journal Current Biology.

Rep. Eric Swalwell (D-CA) called for congressional action to hold former president Donald Trump and his administration accountable for their abuses of power.

The California Democrat, whose personal data was seized by Trump's Department of Justice, said the twice-impeached one-term president must face consequences for his abuses to ensure that future presidents aren't tempted to copy his playbook, just as Trump felt emboldened by Richard Nixon's pesidency.