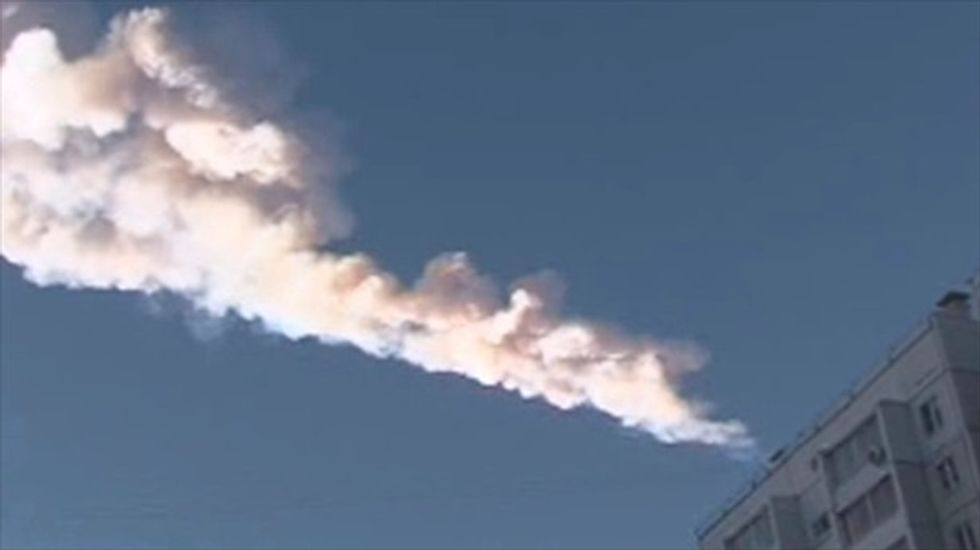 Analysis of a mineral called jadeite that was embedded in fragments recovered after the explosion show that the asteroid's parent body struck a larger asteroid at a relative speed of some 3,000 mph (4,800 kph).

"This impact might have separated the Chelyabinsk asteroid from its parent body and delivered it to the Earth," lead researcher Shin Ozawa, with the University of Tohoku in Japan, wrote in a paper published this week in the journal Scientific Reports.

The discovery is expected to give scientists more insight into how an asteroid may end up on a collision course with Earth. Scientists suspect the collision happened about 290 million years ago.

Most of the 65-foot (20-meter) wide asteroid that blazed over Chelyabinsk in southwestern Siberia on Feb. 15, 2013, was incinerated in a bright fireball, the result of frictional heating as it dropped through the atmosphere at 42,000 mph (67,600 kph). But many small fragments survived.

The asteroid was traveling almost 60 times the speed of sound and exploded about 18 miles (30 km) above ground with a force nearly 30 times as powerful as the atomic bomb dropped by the United States on Hiroshima, Japan in 1945 in World War Two.

The blast over Chelyabinsk caused shock waves that destroyed buildings and shattered windows. More than 1,000 people were injured by flying debris.

Jadeite, which is one of the minerals in the gemstone jade, forms only under extreme pressure and high temperature. The form of jadeite found in the Chelyabinsk meteorites indicates that the asteroid’s parent body hit another asteroid that was at least 492 feet (150 meters) in diameter.

Scientists are still analyzing fragments of the asteroid and calculating its precise path toward Earth.

In an email to Reuters, Ozawa described the Chelyabinsk meteorite as "a unique sample.”

"It is a near-Earth object that actually hit the Earth, and its trajectory was well-recorded,” Ozawa wrote.

The Chelyabinsk asteroid caused the second most powerful explosion in recorded history. In 1908, a suspected asteroid exploded with a force about 1,000 times more powerful than the Hiroshima atomic bomb, leveling some 80 million trees over 772 square miles (2,000 square km) near Russia’s Podkamennaya Tunguska River in Siberia.

The first possible meteorites from the so-called Tunguska event were recovered just last year. Results have not yet been published.

[Image: The trail of a falling object is seen above a residential apartment block in the Urals city of Chelyabinsk, in this still image taken from video shot on February 15, 2013. REUTERS/OOO Spetszakaz]