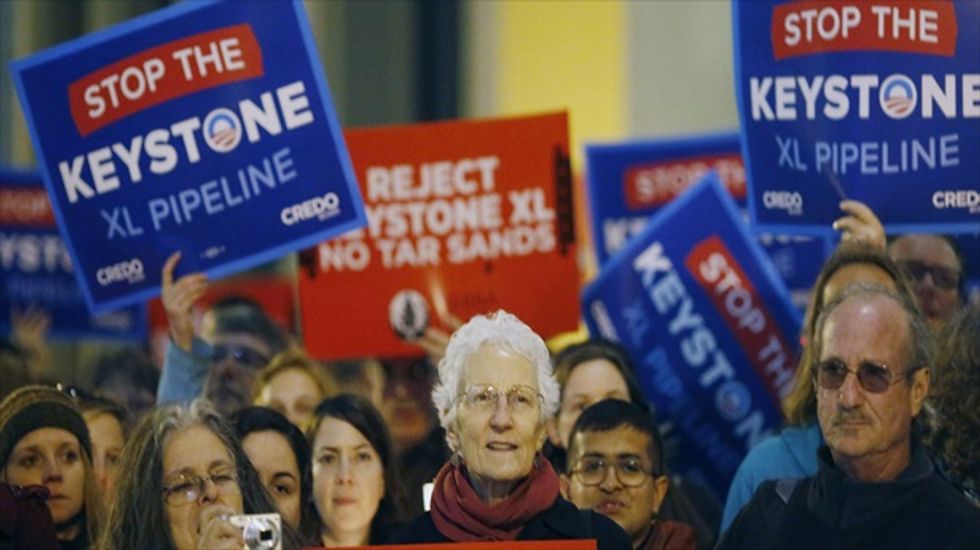 By Thomas Ferraro and Timothy Gardner

On a nearly party-line vote of 55-36, President Barack Obama's Democrats fell short of the 60 votes needed to advance the bipartisan energy bill supported by the White House.

Senate Majority Leader Harry Reid, a Nevada Democrat, had offered a vote on a separate bill to take the final decision on Keystone out of Obama's hands and give it to Congress if Republicans allowed passage of the energy bill.

But Republicans refused. They complained that Reid barred them from offering amendments to the bill, including one that would have reined in emissions-cutting regulations on coal-fired power plants, a top strategy in Obama's fight against climate change.

In turn, the bill, sponsored by Senators Jeanne Shaheen, a New Hampshire Democrat, and Rob Portman, an Ohio Republican, would help protect the environment, create nearly 200,000 jobs, and save consumers billions of dollars a year by 2030, backers said.

"Today's failure to move forward on a bipartisan energy efficiency bill is yet another disappointing example of Washington's dysfunction," Portman said.

"It's a sad day in the U.S. Senate when more than 270 organizations - from business to environmental groups - can get behind a good, bipartisan effort, but we can't get votes on a few amendments to pass it."

Democrats accused Republicans of being more interested in making Obama's repeated delays on Keystone an election-year issue than voting to build the project or pass an energy bill.

Congress has not passed significant energy legislation since 2007. Shaheen and Portman hoped their bill would not suffer the same fate as the sweeping climate bill the Senate killed in 2010. But now it looks as if energy efficiency is doomed until after the November 4 election.

Reid had offered a vote on a Keystone measure sponsored by all 45 Republicans and 11 of the 55 Senate Democrats in return for the bill.

It was unclear if they could get the 60 votes needed to pass the legislation, which would allow congressional approval of Keystone. But even if approved, Obama was certain to veto it.

A Senate vote on Keystone would have shown broad bipartisan support for the project and put more pressure on Obama to end years of delays and finally make a decision.

Senator Mary Landrieu of Louisiana, the chief Democratic sponsor of the Keystone bill, said: "This is just the latest skirmish, and the battle to build Keystone is not over."