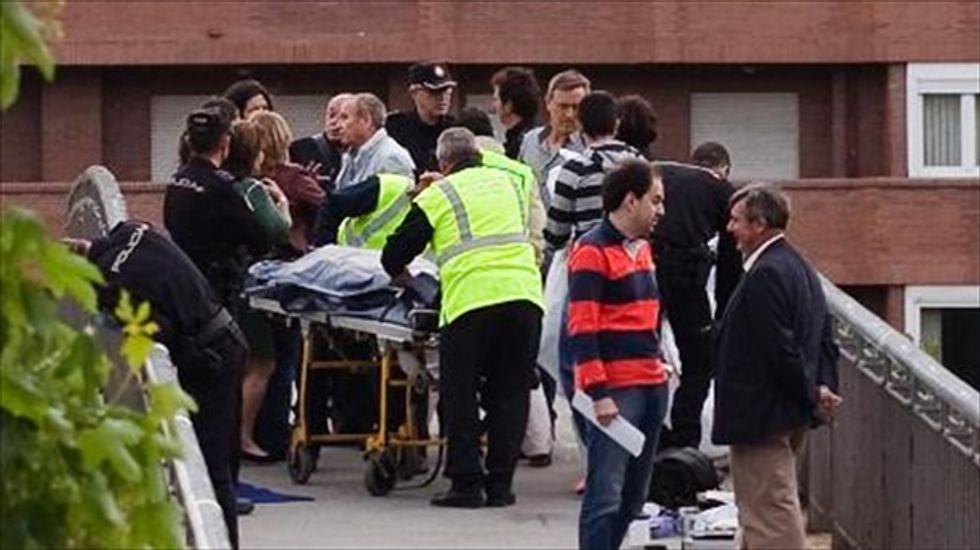 Funeral directors take away the body of Leon provincial council chief Isabel Carrasco on May 12, 2014 [AFP]

Spanish police arrested a mother and daughter suspected of shooting dead a ruling party politician in broad daylight Monday in apparent revenge after the younger woman lost her job.

Officials said the wife and daughter of a police inspector were arrested on suspicion of gunning down Isabel Carrasco, conservative leader of the provincial council in Leon, northern Spain.

Police put a white sheet over Carrasco's body as it lay on a pedestrian bridge above the Bernesga River in the northern university city.

Police rolled it away on a stretcher and began dusting the bridge for fingerprints, an AFP photographer saw.

The killing of Carrasco, 59, a longtime local leader of the governing Popular Party, shocked the Spanish political world and halted their European election campaigns.

Officials said an assailant fired several bullets at Carrasco in the late afternoon. The two woman were arrested shortly afterwards and police are investigating whether they killed the politician.

"It seems that the daughter was fired yesterday from the council where she worked as an engineer," an interior ministry spokesman told AFP.

"For that reason, everything indicates that it was personal vengeance," he said.

"The police are carrying out tests to find out who fired the shots," he added. "The gun has not been found."

An man who asked not to be identified who was walking by the river at the time said he heard five shots as he passed under the footbridge.

"We thought it was firecrackers. At that time the place was full of people, children playing, people walking their dogs," he told the online edition of daily newspaper El Pais.

The national government delegate in the Castilla y Leon region, Ramiro Ruiz Medrano, called it "a tragic act without explanation" and said Carrasco was not known to have received any threats.

He said the two women were "the wife and daughter of a police inspector".

Spain has seen many political killings over its history, but the interior ministry said Carrasco's did not look politically motivated.

Numerous PP officials were assassinated in the 1990s and early 2000s in killings blamed on the Basque separatist group ETA, which announced an end to violence in 2011.

"Everything points to it being a personal act of vengeance unrelated to her public position," an Interior Ministry spokeswoman said of Monday's attack.

Prime Minister Mariano Rajoy said on Twitter he was "dismayed by the murder of Isabel Carrasco".

"My condolences and support to her family and friends. Now is the time to be united," he wrote.

Besides being head of the Leon provincial council, Carrasco was also leader of the party for Leon province.

Both the Popular Party and the main opposition Socialists cancelled campaign acts for the elections for the European Parliament which will be held in Spain on May 25.

A lawyer by training, Carrasco was born in the province of Leon and held various provincial and regional posts, according to her biography on Leon city hall's website.

She had led the Leon provincial council since 2007.

The local newspaper Diario de Leon described her as a "powerful character".

"Despite her small size, her very strong character and the way she took the reins of power caused her to be known as the 'super-delegate'," it wrote.

"It was precisely this character and the power she accumulated that earned her numerous political rivals.

Since taking office in 2011 the Popular Party has imposed sharp government spending cuts to rein in the public deficit at a time when one in four is out of work, sparking noisy street protests.

Even though the Arizona Republican Party is doubling down on its support for former President Donald Trump, some within the party are worried that more moderate voters in the state are fleeing them in the wake of the Capitol riots.

CNN's Kyung Lah on Wednesday reported that "the Arizona secretary of state's office says 9,944 registered Republicans, that's almost 10,000 of them, have officially switched their party registration since the U.S. capitol riots."