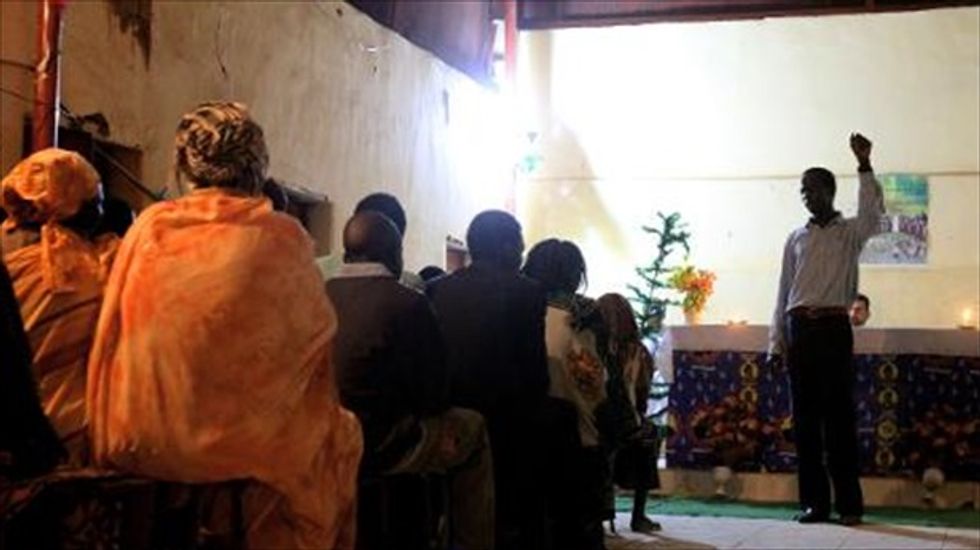 A Sudanese judge sentenced a heavily pregnant Christian woman to hang for apostasy, a ruling that Britain denounced as "barbaric" and left the United States "deeply disturbed".

Born to a Muslim father, she was convicted under the Islamic sharia law that has been in force in Sudan since 1983 and outlaws conversions of faith on pain of death.

"We gave you three days to recant but you insist on not returning to Islam. I sentence you to be hanged," Judge Abbas Mohammed Al-Khalifa told the woman, addressing her by her father's Muslim name, Adraf Al-Hadi Mohammed Abdullah.

Khalifa also sentenced Ishag to 100 lashes for "adultery". Under Sudan's interpretation of sharia, a Muslim woman cannot marry a non-Muslim man and any such relationship is regarded as adulterous.

In Washington, the State Department said the United States was "deeply disturbed" by the sentence and urged Sudan to protect freedom of religion.

"We strongly condemn this sentence and urge the government of Sudan to meet its obligations under international human rights law," National Security Council spokeswoman Caitlin Hayden added in a statement.

She noted that freedom of religion is a right enshrined in Sudan's 2005 constitution.

"This barbaric sentence highlights the stark divide between the practices of the Sudanese courts and the country's international human rights obligations," he said.

Ishag, dressed in traditional Sudanese robes with her head covered, reacted without emotion when the verdict was read out at a court in the Khartoum district of Haj Yousef, where many Christians live.

Earlier in the hearing, an Islamic religious leader spoke with her in the caged dock for about 30 minutes, trying to convince her to change her mind.

But she calmly told the judge: "I am a Christian and I never committed apostasy."

Sudan has an Islamist government but, other than floggings, extreme sharia law punishments have been rare.

"The fact that a woman has been sentenced to death for her religious choice, and to flogging for being married to a man of an allegedly different religion, is appalling and abhorrent," said Amnesty International's Sudan researcher, Manar Idriss.

If the death sentence is carried out, Ishag will be the first person executed for apostasy under the 1991 penal code, said Christian Solidarity Worldwide, a British-based campaign group.

One of Ishag's lawyers, Mohanad Mustafa, told AFP that they would take the case all the way to Sudan's top Constitutional Court if necessary to get the verdict overturned.

The criminal code prohibition against apostasy violates the constitution, he said.

After the hearing, about 50 people demonstrated against the death sentence.

"No to executing Meriam," said one of their signs, while another proclaimed: "Religious rights are a constitutional right."

"This is a decision of the law. Why are you gathered here?" one supporter asked, prompting an activist to retort: "Why do you want to execute Meriam? Why don't you bring corruptors to the court?"

Sudan is one of the most corrupt countries in the world, ranked 174th out of 177 by campaign group Transparency International.

About 100 people, mostly Ishag supporters, were in court to hear the sentence, which was also observed by Western diplomats.

In a joint statement ahead of the ruling, the embassies of the United States, Canada, Britain and the Netherlands expressed "deep concern" and urged "justice and compassion".

She was convicted on Sunday but given until Thursday to recant.

Amnesty said Ishag was raised as an Orthodox Christian, her mother's religion, because her Muslim father was absent.

Information Minister Ahmed Bilal Osman insisted that Sudan is not unique in its law against apostasy.

"In Saudi Arabia, in all the Muslim countries, it is not allowed at all for a Muslim to change his religion," he said.