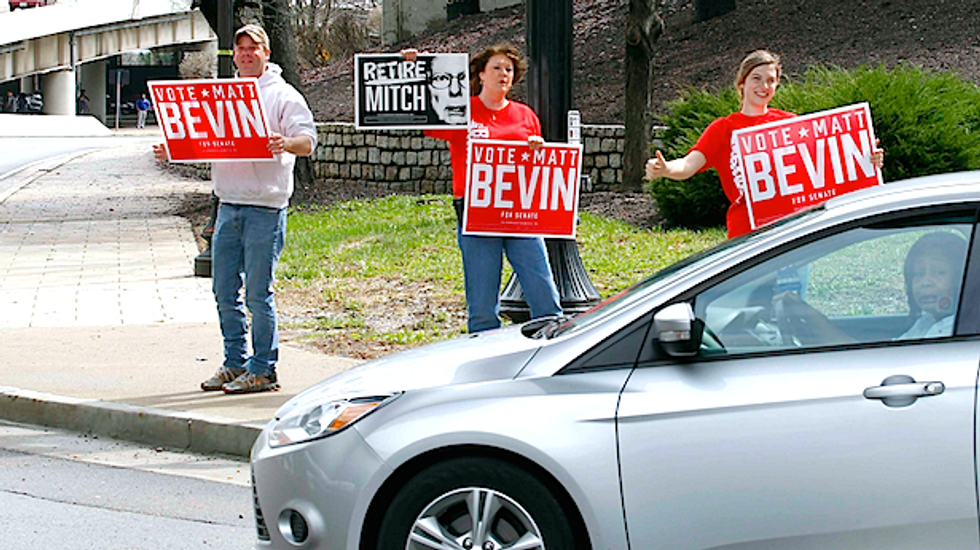 Voters in six states will choose candidates on Tuesday for some of November's top congressional election races, including another round of crucial U.S. Senate primaries between the Republican establishment and Tea Party favorites in Kentucky, Georgia and Oregon.

Tea Party candidates are fighting an uphill battle in all three U.S. Senate contests, which could be vital to Republican hopes of picking up the six seats they need to recapture control of the chamber from Democrats in November.

Idaho, Arkansas and Pennsylvania also will hold primaries on the campaign's biggest day of voting so far.

The most closely watched contest is in Kentucky, where Republican Senate leader Mitch McConnell is a heavy favorite to beat Tea Party challenger Matt Bevin, setting up one of November's top Senate races against Democrat Alison Lundergan Grimes.

Republican Party leaders, determined to avoid the sort of divisive primaries that helped cost them winnable Senate races in 2010 and 2012, have been more proactive this year in backing mainstream candidates they think can win in November.

The effort has paid off so far with wins by establishment-backed candidates in North Carolina and Texas Senate primaries.

This year, McConnell was a top target of Tea Party groups, but polls show him with a comfortable double-digit lead. Bevin attacked McConnell's long tenure in Washington and argued he had not done enough to fight spending and President Barack Obama's agenda.

But McConnell and his allies pummeled Bevin for his inexperience, and Bevin reinforced those claims with his own campaign trail missteps, including an appearance at a rally promoting cockfighting. Bevin said he thought it was a rally in support of states' rights.

"McConnell made it very clear early on that he and Republicans were going to take on the Tea Party, and they have been very aggressive," said Stephen Voss, a political scientist at the University of Kentucky.

A crowded Senate primary field in Georgia makes a July 22 runoff likely between the top two finishers on Tuesday for the right to face off against Democrat Michelle Nunn in November.

The most conservative Tea Party candidates in Georgia are not among the leaders in recent polls, with businessman David Perdue, U.S. Representative Jack Kingston and former Georgia Secretary of State Karen Handel fighting for the top spots.

In Oregon, where polling has been less frequent, moderate Monica Wehby is considered a slight favorite against a Tea Party-backed state representative.

They are vying for the right to face Democratic Senator Jeff Merkley in the Democratic-leaning state, where problems with the state's healthcare exchange have given Republicans hope of victory.

Other top races on Tuesday include a Tea Party challenge in Idaho to eight-term Republican Representative Mike Simpson, who has been backed by the pro-business U.S. Chamber of Commerce, and in Pennsylvania to seven-term Representative Bill Shuster.