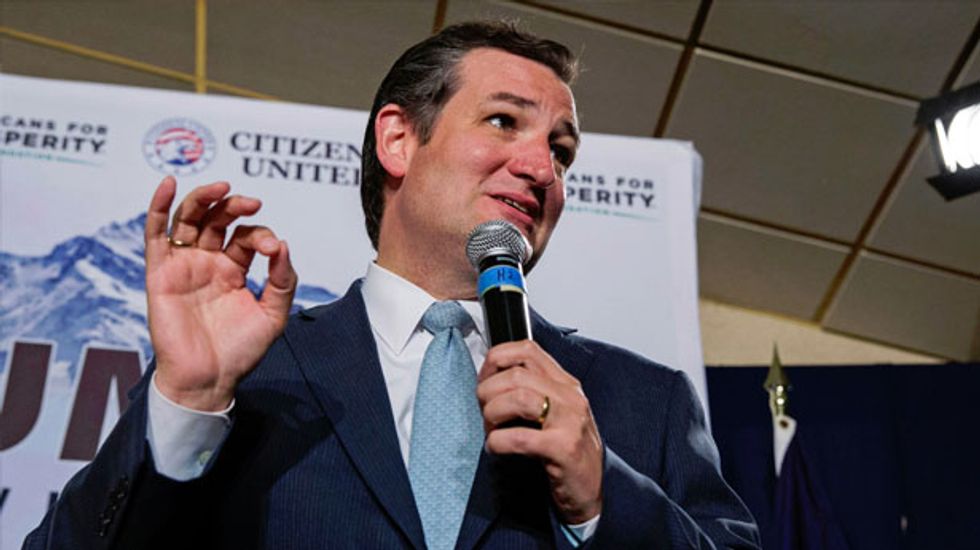 AUSTIN, Texas (Reuters) - Neither U.S. Senator Ted Cruz nor Governor Rick Perry are on the ballot in Tuesday's run-off elections in Texas, but that doesn't mean the two larger-than-life politicians who share a penchant for cowboy boots are not central figures in the contest.

The Lone Star State's two most prominent Republicans are dueling for dominance of the state party - and, perhaps, for the inside track to be the GOP's nominee for the 2016 presidential race. Tuesday's results could shift the balance in that battle.

Cruz appears likely to win this round, with Tea Party allies poised to post victories in several contests. That could further raise the first-term senator's profile and return some luster to the Tea Party movement after several candidates were defeated by mainstream Republicans in primaries this week in other states.

"This would serve as further verification that Texas Republican primary voters have moved further to the right and embraced Cruz's message of ideological purity and partisanship over a more pragmatic conservative vision of someone like Perry, during most of his tenure in office," said Mark Jones, chair of the political science department at Rice University in Houston.

The battle isn't just about two politicians' ambitions. Texas, with a $1.4 trillion a year economy that is larger than South Korea's, plays a crucial role in national politics as the home of many deep-pocketed Republican donors and as an incubator of conservative policies often copied by other states.

In one key contest Tuesday, incumbent Lieutenant Governor David Dewhurst, Perry's longtime top aide, is seeking re-election. Two years ago he lost to Cruz in a run-off for the U.S. Senate seat.

Dewhurst is up against Dan Patrick, a state senator backed by Cruz and the Tea Party. Patrick appears to have the inside track, which could make him the front-runner in November's election in the heavily Republican state.

Perry, who endorsed Dewhurst in his Senate race against Cruz, has largely stayed out of the race, distancing himself from his deputy.

In the other high-profile run-off, state Senator Ken Paxton has been trying to parlay his ties to Cruz into winning the party's nomination for attorney general over Dan Branch, a state representative since 2002.

Polls show that Cruz is the top dog among Texas voters. An April survey of Texans by Public Policy Polling gave him the highest approval rating of any major politician in the state.

Perry, the state's longest-serving governor, rode the first wave of Tea Party support in 2009 and 2010. But after a failed presidential bid in 2010, he lost the mantle to Cruz, a Harvard Law School graduate and a nimble debater. He is not seeking re-election and will step down next year.

In what has been a cold war, Cruz and Perry have mostly avoided commenting on the other or sharing a stage. They have done little direct campaigning in this year's primaries.

When they do fire verbal shots at each other, the subject is usually their respective roles in government. This month, Cruz took a veiled jab at Perry, questioning the part governors play in recruiting businesses.

"Nothing drives me crazier than politicians who run around talking about the jobs they've created," the Dallas Morning News quoted him as saying.

Perry took a swipe at Cruz last year in an interview with the Washington Times where he described as "political theater" the campaign Cruz led that resulted in a federal government shutdown, a move polls showed hurt the GOP.

Recently, Perry has trumpeted the business he has brought to Texas, including Toyota Motor Corp's recent relocation of its U.S. sales headquarters from California to Plano, Texas.

Such moves are aimed as much at rallying popular support as they are at sending a message to business that Perry can be a more reliable ally than Cruz, said Rice University's Jones.

"Rick Perry far and away has better connections with big money donors in Texas, given his longer tenure in power as well as the viewpoint by establishment Republicans that Perry is someone with whom they can work," he said.

"Cruz has more of a national appeal when it comes to fundraising, that while he will raise money from Texans, he won't be raising money from many pragmatic business people in Texas."