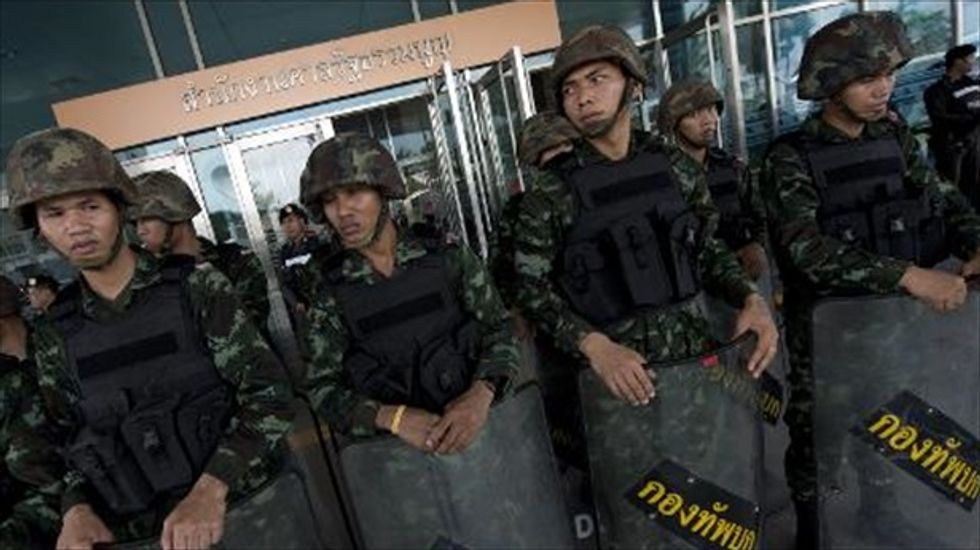 Thai soldiers stand guard prior to the arrival of Prime Minister Yingluck Shinawatra at the Constitutional Court on May 6, 2014 [AFP]

An announcement on military-run television said martial law had been invoked "to restore peace and order for people from all sides", stressing that the move "is not a coup".

"The public do not need to panic but can still live their lives as normal," it added.

It was not immediately clear if the move -- which gives the military control of nationwide security -- had been approved by the country's embattled prime minister.

The imposition of martial law risks angering supporters of the government if it is seen as tantamount to a coup.

The dismissal of prime minister Yingluck Shinawatra earlier this month in a controversial court ruling has sent tensions soaring in the kingdom, which has endured years of political turmoil.

Her "Red Shirt" supporters have warned of the threat of civil war if power is handed to an unelected leader, as demanded by the opposition.

They are calling on the upper house of parliament, the Senate, to invoke a vaguely worded clause in the constitution to remove caretaker Prime Minister Niwattumrong Boonsongpaisan and appoint a new leader.

The Election Commission said last week that a general election scheduled for July 20 was "no longer possible" as polls could not be held without the support of the protesters.

An election held in February was annulled after demonstrators blocked voting.