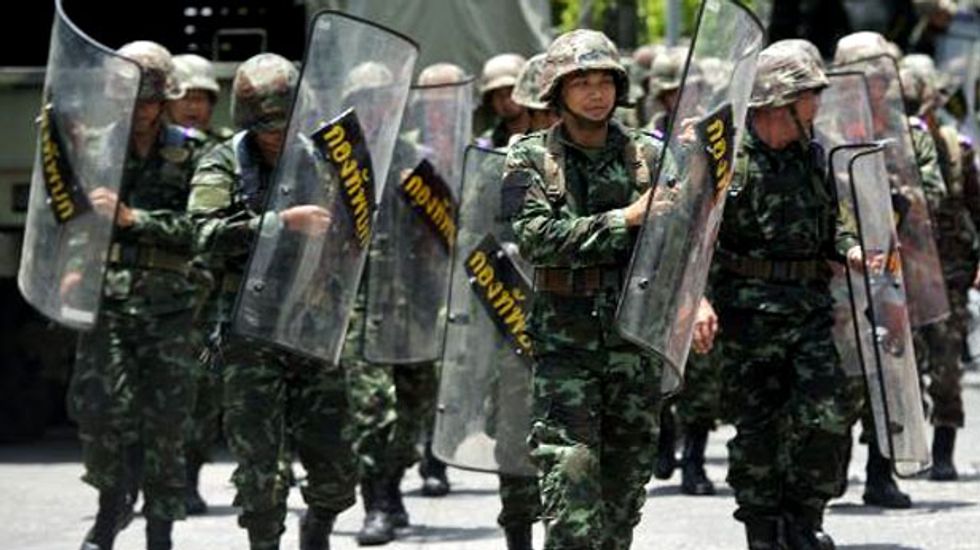 Some snatched selfies with armed soldiers but most passers-by barely blinked as troops and jeeps mounted with machine-guns took to Bangkok's streets early Tuesday, a peculiarly pragmatic Thai response to political upheaval.

Traffic-halting marches, sandbagged bunkers and sporadic violence have become commonplace in a struggle lasting almost seven months to overthrow the government, leaving the majority of Bangkok residents broadly inured to the turmoil.

Three soldiers wearing flak jackets and carrying machine guns stood by a military jeep at one downtown intersection early Tuesday, politely posing for photographs with commuters as news spread of the military's declaration of martial law.

A smattering of bemused tourists peered at the troops at the Ratchaprasong junction, a major shopping district which includes high-end hotels.

It is also a highly symbolic site after a military crackdown on a "Red Shirt" protest in 2010 left scores dead there. Monday was the fourth anniversary of the crackdown.

A man on a motorcycle sped by shouting "Su, Su!" (Fight,Fight!) a Thai phrase of encouragement, in a sign that some welcome the military intervention.

The army has staged 18 coups or attempted coups since 1932 and is seen by some as a stabilising force within the kingdom's febrile politics.

Small groups of armed soldiers were stationed along main roads throughout the capital. But for most of the city it was business as usual.

While the presence of armed soldiers on the streets raises the stakes for a caretaker government whose authority appears fatally undermined, it did not appear to ruffle many Thais.

"My parents told me to go about my life as normal," the 17-year-old added as he travelled to school.

Several others who spoke to AFP were unaware of the decree by Tuesday afternoon even though it gives authorities sweeping powers -- including the right to disperse protest groups, search and detain people, censor the media and enforce a curfew.

Bangkok has for several weeks seen unarmed troops stationed in dozens of sandbagged bunkers across the capital.

And demonstrators at different times have occupied major traffic junctions, a central park and the government headquarters in a noisy, colourful carnival of protest which has become a fixture in the city.

Their rallies have also been targeted by gun and grenade attacks which have left 28 dead and hundreds wounded.

His Red Shirt supporters, who have massed for a rally for several days in a Bangkok suburb, reported Tuesday that soldiers had encircled them.

But there were no immediate reports of tension, although Red Shirt guards thoroughly searched vehicles entering the area.

Instead the day was punctuated by television announcements on all channels by the newly-formed Peace and Order Maintaining Command, with army chief General Prayut Chan-O-Cha as its head.

But with the army denying that its martial law declaration was tantamount to a coup, it was unclear what the hours and days ahead would hold.

"I am not worried but let's wait and see," said Win, a manager for an IT company who gave only one name.

"Now there is deadlock. I'm OK with martial law, it is a way to control the two sides. In a few days, the situation will be clearer."