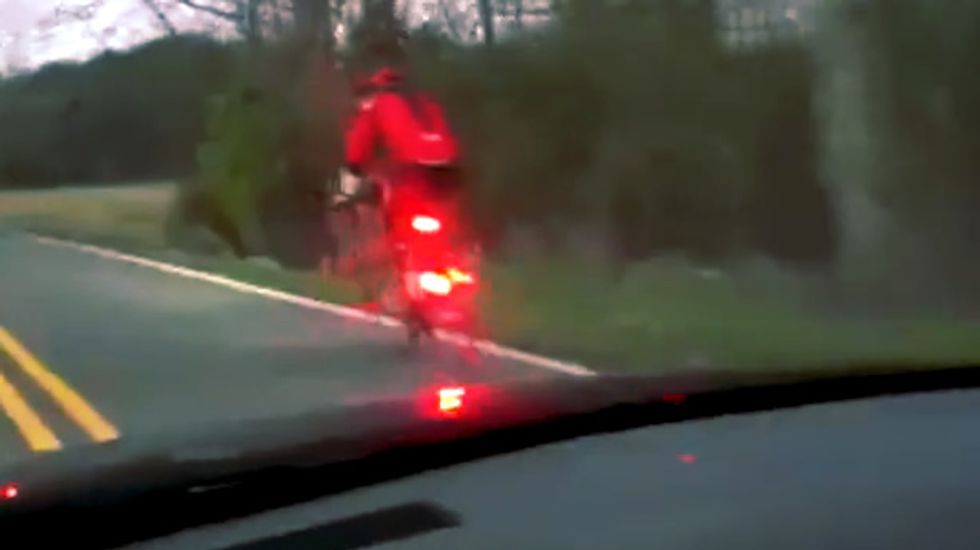 An Alabama man who posted videos of himself complaining about bicyclists has been arrested and charged with reckless endangerment.

In the videos, Keith Maddox describes what it's like sharing the road with bicyclists as he drives to work.

"See what I was talking about?" he says in a video posted on May 21, 2014. "Look there! Look right there. I ought to run him in the ditch. Ride your little bicycle!" he yells as he passes the bicyclist.

In another video, he passes a bicyclist and says, "Lord have mercy, I'm gonna hurt one of them one of these days. Can't help myself, I'm gonna do it."

"That scare you boys?" he yells.

The videos were discovered by cycling enthusiast groups online, who alerted the Calhoun County Sheriff's office to Maddox's threats. They arrested him and charged him with reckless endangerment, a misdemeanor charge, and released him on $3,000 bond.

Maddox asked for forgiveness on his Facebook page with a note -- since taken down -- in which he apologized "to all people that I have offended over those absolute stupid videos that I posted ...anybody who knows me knows that I would never ever intensionally [sic] hurt anyone...those were in very bad taste and I especially want to apologize to the northeast Alabama bicycle association...I am truly sorry for Anyone I may have offended....and please everyone share the road and be very aware of bicycle riders everywhere..and again I am truly sorry for my extremely bad judgement...please except my apology thanks."

Watch a compilation of the videos that Maddox posted below.