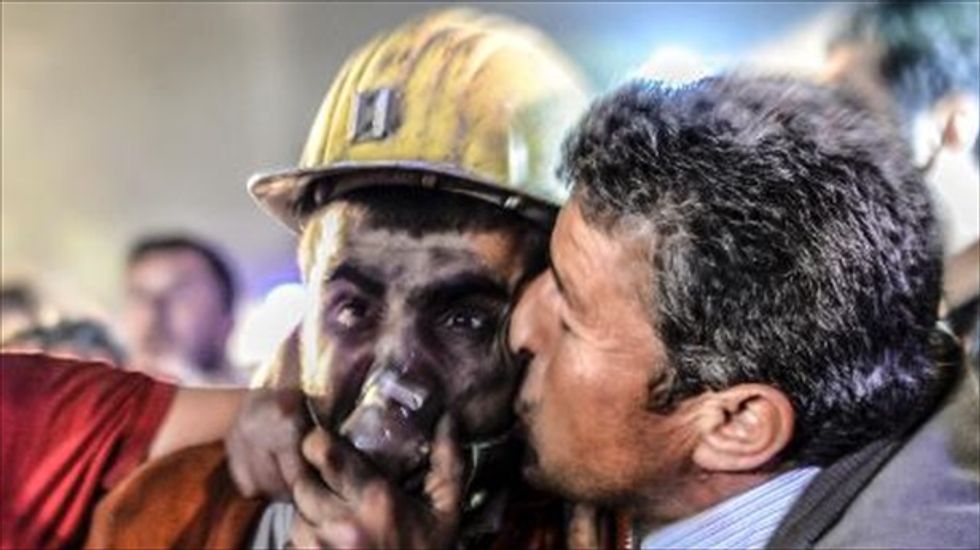 At least 151 people have been killed and hundreds more remain trapped underground after an explosion and fire in a coal mine in western Turkey, the energy minister said Wednesday.

A total of 787 mineworkers were trapped at the time of the explosion on Tuesday and "we have evacuated 363 people (including the 151 dead) so far," said Energy Minister Taner Yildiz.

He said it was likely the death toll would rise further.

"Time isn't in our favor," he warned, adding that of those recovered 76 people were injured, including one seriously.

Earlier, Cengiz Ergun, the mayor of the province of Manisa where the mine is located, put the toll at 157 dead.

Rescue workers were trying desperately to reach the scores of trapped miners and had managed to evacuate around 50, a security source told AFP.

The source said there were pockets in the mine, one of which was open so rescuers were able to reach the workers, but the second was blocked with workers trapped inside.

The explosion was believed to have been triggered by a faulty electrical transformer at around 1230 GMT.

Hundreds of people gathered around the explosion site as rescuers brought out injured workers, who were having difficulty breathing and coughing due to the dust.

Sena Isbiler, a mother of one of the miners, stood on top of piles of wood, craning her neck to see who was being led out of the mine.

"I have been waiting for my son since early afternoon," she told AFP.

"I haven't heard anything about him yet."

Fire officials were trying to pump clean air into the mine shaft for those who remained trapped some two kilometres (one mile) below the surface and four kilometres from the entrance.

Late in the evening injured people were still emerging from the collapsed mine -- some walking, others being carried by rescue workers while being given oxygen.

Nearby, security officers tried to keep ambulance routes clear to ensure aid could reach the victims.

The mining company Soma Komur issued a statement calling the mine collapse a "tragic accident".

"Unfortunately, some of our workers have lost their lives in this tragic accident," the statement said.

"The accident happened despite maximum safety measures and inspections, but we have been able to take prompt action," it added.

Turkey's ministry of labour and social security said the mine was last inspected on March 17 and was found to be compliant with safety regulations.

But Oktay Berrin, a miner, said workers were not protected underground.

"There is no security in this mine," he told AFP.

"The unions are just puppets and our management only cares about money."

Turkish Prime Minister Recep Tayyip Erdogan's office said he would arrive in Soma on Wednesday after cancelling a trip to Albania.

Speaking in Ankara, the leader expressed his "heartfelt condolences" to the families of those who died.

"Some of the workers have been rescued and I hope we will be able to rescue the others," Erdogan said.

Energy Minister Yildiz told journalists in Soma that a team of 400 people where involved in the rescue effort and that the main cause of the deaths was carbon monoxide and dioxide poisoning.

"Time isn’t working in our favour. We need to get them out. We could be in a troubled situation," he said, adding rescuers would work through the night.

The miners are all thought to have gas masks, but it was not clear how long they would last.

Vedat Didari, a professor of mining, told AFP that the biggest risk was the lack of oxygen.

"If the ceiling fans are not working, the workers could die within an hour," said Didari, from the Bulent Ecevit University in the city of Zonguldak.

Explosions and cave-ins are common in Turkey, particularly in private mines where safety regulations are often flouted.

Turkey's worst mining accident happened in 1992 when 263 workers were killed in a gas explosion in a mine in Zonguldak.

Soma is one of the key centres for lignite coal mining in Turkey, a district with a population of around 100,000 where the mines and a lignite-fired thermal power plant are the main economic activity.