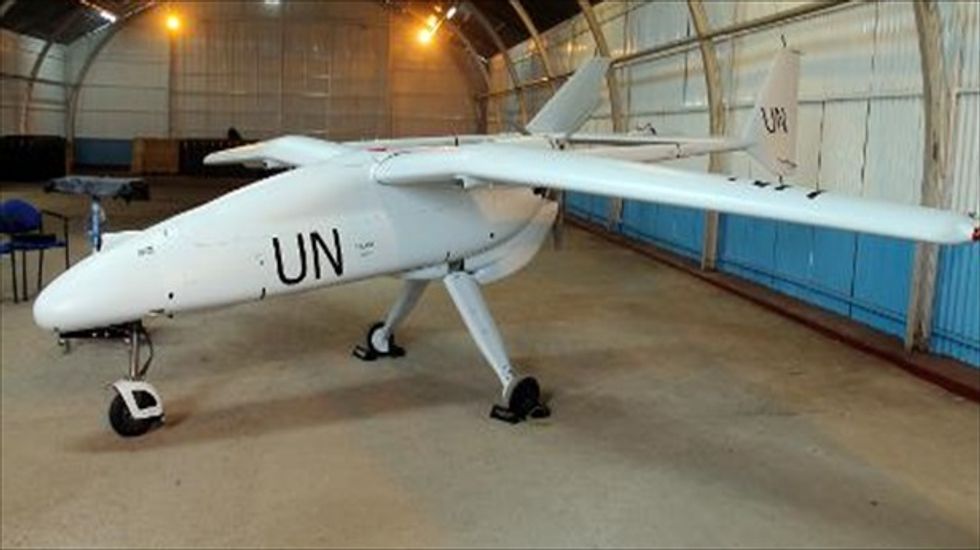 An Italian-made surveillance drone belonging to the UN's MONUSCO peacekeeping mission in the Democratic Republic of Congo sits in a hangar on Dec. 3, 2013 [AFP]

On International Day of UN Peacekeepers, staff paid tribute to more than 3,000 peacekeepers who have died since 1948, including 106 last year, and to those still serving on the frontline.

The head of UN peacekeeping, Herve Ladsous, said, on average, a peacekeeper dies every 30 days, and technology needs to be upgraded to assist a record number of U.N. boots on the ground.

The Security Council last month approved a new mission in Central African Republic and in December voted to send an extra 5,500 soldiers to war-torn South Sudan.

"Clearly we cannot continue to afford to work with 20th century tools in the 21st century," he told reporters in New York.

Ladsous said drones had already helped in DR Congo and could be vital in improving humanitarian access.

"They (convoys) can use the images of the machines to make sure they are not going to be attacked or hijacked on the way. That I think is a very significant development," Ladsous said.

"We do need them (drones) in countries like Mali, like Central African Republic and clearly in South Sudan it would be my desire that we might deploy them," he said.

Surveillance drones could replace some military observers and make a big difference.

"In some cases using technology can make it necessary not to have so many boots on the ground and also, lets never forget, to improve on the delivery," Ladsous said.

"This is an opportunity for them to come back or move into United Nations peacekeeping, especially with high-tech assets, state of the art equipment... that could make the difference."

He pointed to Ireland, in the Golan Heights, and the Netherlands and Sweden, in Mali, as examples of EU and NATO countries who had also served in Afghanistan.

"What gives the best capability to the troops? And if that is technology then certainly we want to study to see what is in our means to deploy," she said.

Haq said U.N. peacekeepers were more at risk than ever.

"We are facing the specific targeting of peacekeepers and also we are seeing the merging of conflict and international criminal activities," she said.

Ladsous singled out the UN missions in Darfur and South Sudan as the deadliest in 2013.

He also expressed frustration about the extra 5,500 troops approved for South Sudan being "too slow" to deploy.

"The ceasefire is not really implemented. The political process is marking time and of course we have to keep insisting that this situation has to stop," he said.

In Darfur, he said violence was also on the rise, with another 300,000 people internally displaced since the end of last year -- the same number as during the whole of 2013.

Rep. Matt Gaetz attempted to deflect from his scandals with a Friday night speech at the "Save America Summit" held at Trump National Golf Course Doral.

Earlier in the speech, Gaetz lied to the audience and said the 2020 election had been "stolen."

Matt Gaetz offered a great deal of red meat during a speech at the Save America Summit in Florida.