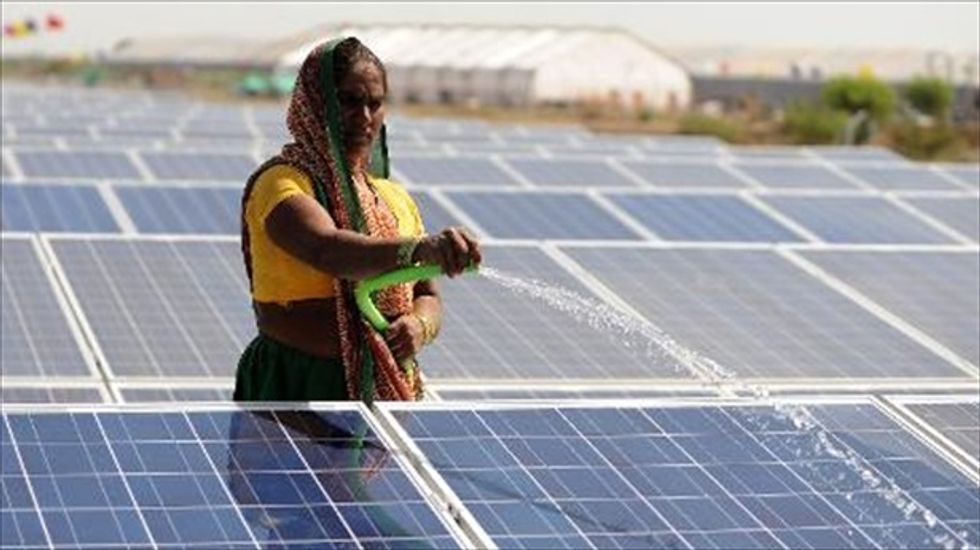 An Indian worker sprays water onto panels of a solar power plant at Chandrasan village of Mehsana district, on April 22, 2012 [AFP]

Washington on Friday took its battle to get India to open its solar market a step further, demanding that the WTO create a panel to review the dispute.

The United States told the World Trade Organization's dispute settlement board that consultations with India had gone nowhere, insisting the global body step in.

Washington maintains New Delhi’s requirement that only locally made products be used in its solar industry impedes competition.

India, which has some of the world's most ambitious plans for expanding solar power, expressed disappointment at the move, saying that "the United States has chosen to litigate rather than negotiate."

Friday marked the second time the United States has asked the WTO to set up a panel of experts to review the dispute.

India blocked the first request, but the WTO, which polices global trade accords in an effort to offer its 159 member economies a level playing field, is required to grant any panel request made a second time.

In its statement to the WTO, the United States said that it had repeatedly tried to resolve the problem, but to no avail.

"Not only did these consultations fail to resolve the dispute, but India actually chose to expand the scope of the domestic requirements following initial consultations in 2013," it said.

It insisted that such requirements were "inconsistent with WTO obligations and do not promote solar power."

India, whose solar industry has grown rapidly in the past few years as the government looks to ease reliance on imported fossil fuels and coal, has meanwhile defended its solar policies as compliant with WTO regulations and stressed that a number states in the U.S. have similar rules

On Friday, it insisted it had "participated in the consultations with an open mind and had shown willingness to explore all options for a mutually satisfactory solution."

WTO panels are in general composed of three people tasked with investigating complaints and providing recommendations to resolve the dispute.

In principle the investigating panel has six months to deliver its findings, and can authorise retaliatory trade measures by the wronged party.