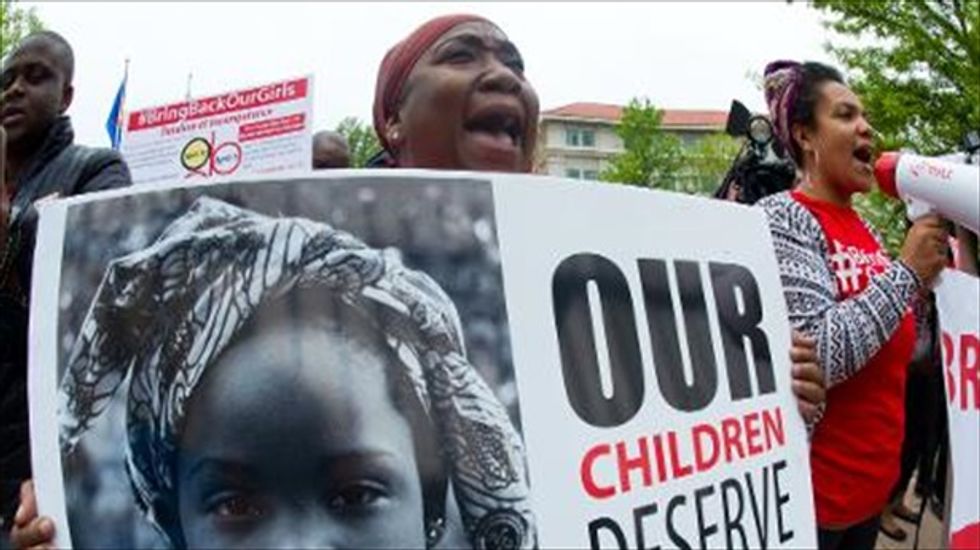 Demonstrators protest on May 14, 2014 in front of the Embassy of Nigeria in Washington [AFP]

The U.S. military is flying surveillance drones as well as manned aircraft over Nigeria to help the search for more than 200 schoolgirls kidnapped by Islamist extremists, the Pentagon said Wednesday.

However, the data is not yet being shared with the Nigerians because Washington is still working out an agreement to govern the sharing of intelligence, Colonel Steven Warren told reporters.

The United States has deployed a Global Hawk, which flies at high altitude, and the manned MC-12, a turboprop plane heavily used in Afghanistan, for the mission, a defense official who spoke on condition of anonymity told AFP.

The Pentagon had initially declined to say publicly if drones were being used.

"I can confirm that we're using both manned and unmanned aerial ISR (intelligence, surveillance and reconnaissance) assets in the search for the kidnapped girls," Warren said, without identifying the plane models.

Both types of aircraft are "unarmed" and being used strictly for surveillance to help track the location of the schoolgirls whose plight has made worldwide headlines, he added.

The unmanned Global Hawk, designed to succeed the U-2 spy plane, can survey a vast area of about 40,000 square miles (100,000 square kilometers) in a day with its sophisticated radar and sensors.

But the Americans insist on precise protocols on how intelligence can be passed on to other countries, fearing that sensitive information could fall into an adversary's hands.

The commander of US forces in Africa, General David Rodriguez, paid a two-day visit to Nigeria this week to discuss how Washington can aid the government in the kidnapping crisis, including an accord on intelligence sharing.

Boko Haram extremists abducted 276 girls from the remote northeastern town of Chibok on April 14, and some 223 are still missing.

The kidnapping has triggered global outrage and the militants on Monday released a new video purporting to show some of the girls.

"We are continuing to work with the Nigerians to help locate the girls. We really don’t know where the girls are," said a senior State Department official who spoke on condition of anonymity.

The area to be searched was "vast" and ideas about what may have happened to the girls remained "speculation," the official said.

The United States was also conferring with neighboring countries and "those governments too are in communication with the Nigerians because they’ve all been engaged to try to figure out how to help with the search for the girls," the official said.

Prior to the kidnapping, the US military had only limited relations with the Nigerian armed forces, which has included training on detecting and defusing homemade bombs.

Security ties have been hampered partly due to Washington's concerns over heavy-handed tactics and human rights abuses by Nigerian troops battling militants in the northeast.

The State Department official acknowledged the issue, saying "we've been very clear about our concerns about... reports of and evidence of (rights) abuses and excessive violations of the Nigerian military."

Washington has urged the Nigerian government "to hold violators accountable."

Under US law, the American government faces restrictions on its security cooperation with foreign military units linked to human rights abuses.

As a result, the United States cannot work with a particular Nigerian counter-terrorism unit, the official said.

"We're the best-trained, most professional military in the world, and if we know where these young girls are, we should go rescue them," McCain told reporters.

McCain mocked the capabilities of Nigeria's military and said any special forces entry should be done without their knowledge.

"You don't want to alert these people," he said of Boko Haram. "These are animals. They are outside the boundaries of human acceptable behavior."

U.S. military officials said privately that a rescue mission would be fraught with massive risks and dangers and that it currently was not deemed an option.