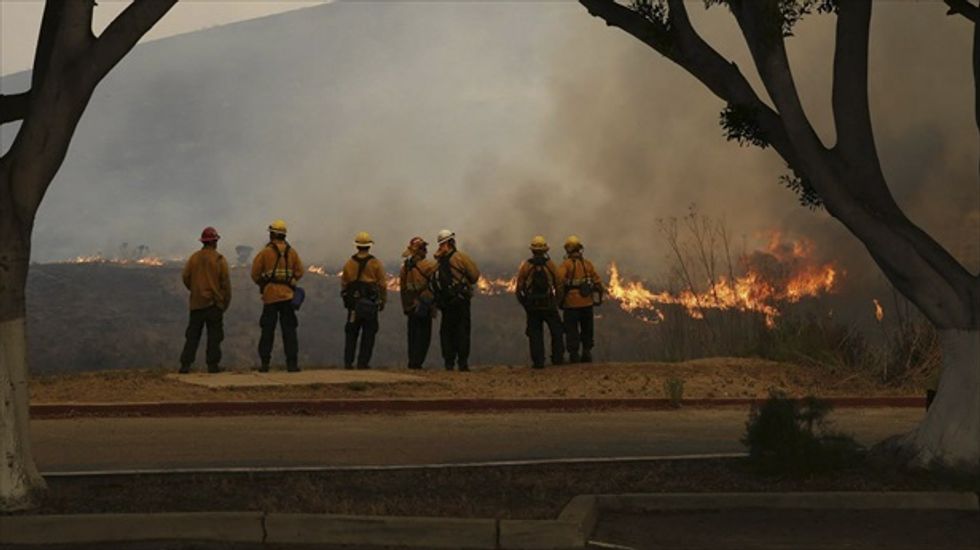 SALMON, Idaho (Reuters) - The U.S. Forest Service is adding four air tankers to its firefighting fleet ahead of a potentially catastrophic fire season in California, Arizona and New Mexico, where drought and high temperatures are heightening risks, fire managers said on Tuesday.

The addition of a DC-10 and three other aircraft that carry thousands of gallons of water and fire retardants brings to 21 the number of large air tankers the Forest Service can deploy this season, Forest Service Chief Tom Tidwell said.

"In the face of what is shaping up to be a catastrophic fire season in the Southwest, the U.S. Forest Service is adding four additional aircraft to its next-generation firefighting fleet," Tidwell said in a statement, saying more aircraft could be added if needed.

The new aircraft come as firefighters have largely contained a series of blazes that broke out last week in the San Diego area, consuming dozens of homes and forcing mass evacuations in an early and ominous start to a fire season that California Governor Jerry Brown said might prove the state's toughest yet.

U.S. fire managers cited climate change and an uptick in the number of homes built in fire-prone lands on the outskirts of communities as factors in a trend that has seen more destructive fires during seasons that have lengthened by as many as 80 days.

Last year drought-plagued Western states faced blazes that tended to char fewer acres than in previous years but that damaged or destroyed more structures and were more expensive to fight.

"We've seen some fires where fewer acres were burned, but they were more severe in terms of destruction," said Jennifer Smith, spokeswoman for the National Interagency Fire Center in Boise.

The U.S. government said earlier this month that it expects to spend $470 million more than it has budgeted to fight wildfires this season, with costs expected to top $1.87 billion for agencies that have just $1.4 billion on hand.

President Barack Obama's spending plan for the fiscal year that begins next October 1 and legislation in Congress would use federal disaster funds for catastrophic wildfires.

Fire risks will remain severe this month in Southern California, southern Arizona, southwestern New Mexico and southern Alaska, expanding into northern California, Nevada and much of Oregon by June, according to forecasts by the National Interagency Fire Center.

[Image: Firefighters watch the Las Pulgas Fire at Camp Pendleton, California in this May 16, 2014 handout photo from the USMC. REUTERS/Cpl. Sarah Wolff/USMC/Handout via Reuters]