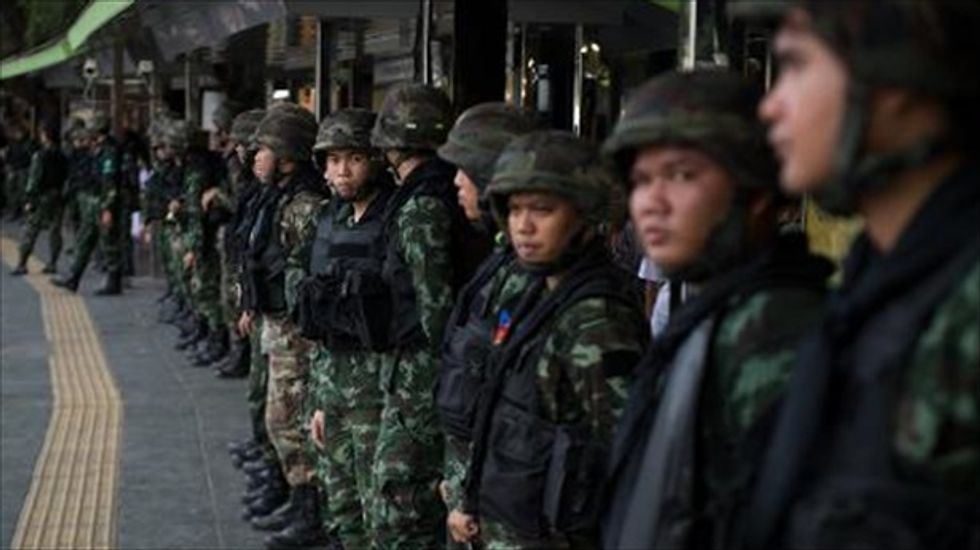 Thai soldiers secure an area at Victory Monument, the site of recent anti-coup protests to prevent further rallies on May 30, 2014 in Bangkok [AFP]

The United States on Friday flatly rejected a plan laid out by Thailand's junta chief to delay elections for more than a year to allow time for political reforms.

"We know that they have announced a, quote, 'road map toward democracy,' but with scant details included," State Department spokeswoman Jen Psaki said.

She insisted that Washington believed the best path forward was "to set a timeline for early elections and to facilitate an inclusive and transparent electoral process."

In his first televised national address after announcing the army takeover last week, junta chief Prayut Chan-O-Cha said the new military regime planned to work towards returning the nation of 67 million people to democracy in around 15 months.

The general said a first phase of around three months would focus on "reconciliation" in the ferociously divided nation.

A cabinet and new draft constitution would then be put in place to enact reforms during a second year-long phase. Only after this could elections be held, he said.

But Psaki said the 15-month timeline was too long, although she would not propose an alternative.

"We don't want anything to end in chaos, but we think setting a timeline for early elections is something that is not just possible, but is what the appropriate step is," she insisted.

"There's no reason that they can't be held in the short term."

After months of political upheaval, the Thai military seized power on May 22 and has founded up scores of political figures, activists and academics.