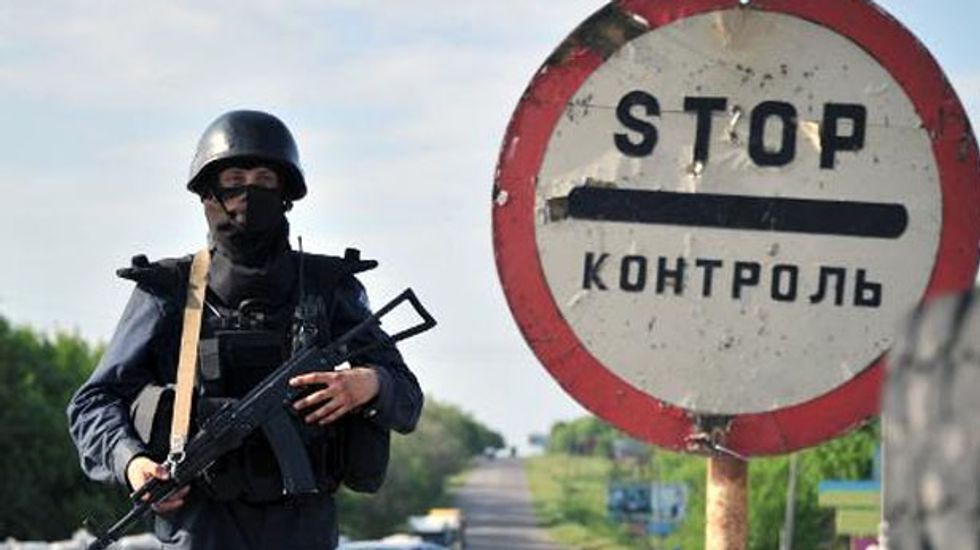 The United Nations warned Friday of an "alarming deterioration" of human rights in eastern Ukraine, where an armed insurgency by pro-Russian separatists is threatening a presidential election just over a week away.

In a new report, the UN's rights chief catalogued a litany of "targeted killings, torture and beatings, abductions, intimidation and some cases of sexual harassment" which it said was carried out by anti-government groups in the east.

With the May 25 vote rapidly approaching, Kiev's interim leaders are battling to keep Ukraine from disintegrating further after Russia's annexation of Crimea in March.

Government forces are pressing on with a military offensive to put down the bloody rebellion in Ukraine's industrial belt where well-armed insurgents have already seized over a dozen towns and cities in just a few weeks.

The West has been pushing an OSCE peace plan to try to resolve the escalating crisis on Europe's doorstep, while threatening further sanctions if Moscow or its "proxies" disrupt the election.

In a veiled reference to Russia, UN High Commissioner for Human Rights Navi Pillay called on those with influence on the armed groups in the east "to do their utmost to rein in these men who seem bent on tearing the country apart".

She also voiced deep concern about "serious problems" of harassment and intimidation facing the Tatar community in Crimea, which was taken over by Russia in the face of international outrage.

But Moscow blasted the report as biased in favour of the new leaders in Kiev, who took power in February after months of pro-EU protests that led to the ouster of Kremlin-backed president Viktor Yanukovych.

"The complete lack of objectivity, blatant discrepancies and double standards leave no doubts that (the report's) authors were performing a political put-up job aimed at clearing the name of the self-declared authorities in Kiev," the foreign ministry said.

In Kiev, the Polish and Swedish foreign ministers were holding talks with Ukrainian leaders to pledge their backing for the vote, seen by the West as key to preventing the country from descending into all-out war.

Two of the main eastern regions, Donetsk and Lugansk, have already proclaimed sovereignty after weekend independence referendums rejected as illegitimate by Kiev and the West, raising concerns about how election will be conducted in rebel-held areas.

Fighting rages almost every night in the east, particularly around Slavyansk, the epicentre of the uprising, and dozens of people have been killed since Kiev launched what it called its "anti-terrorist operation" in mid-April.

Pillay said there has been a "worrying" rise in abductions in the east and unlawful detention of journalists, activists, local politicians, representatives of international organisations and members of the military -- the bodies of some dumped in rivers.

She also highlighted the deteriorating risks for media in the east, where residents say confusion reigns about who is in charge.

Dozens are also still missing after the original pro-EU protests which erupted in Kiev in November, with dozens killed in several days of bloodshed, her report said.

As Western alarm grows, US Secretary of State John Kerry piled the pressure on Moscow Thursday, warning of punishing new US and EU sanctions if it disrupts the election.

"Our message is really, quite simple: 'Let Ukraine vote. Let the Ukrainian people choose their future'," he said at a meeting with European counterparts in London, accusing the rebels of "sowing mayhem".

"Far from defending the rights of the people in the east they are seeking to speak for everybody through the barrel of the gun,"

President Barack Obama has already drafted an executive order for sanctions across key sectors such as banking, energy, defence and mining, adding to punitive measures already imposed by Washington and Brussels.

While Moscow has rolled back on its initial vehement opposition to the election, Foreign Minister Sergei Lavrov this week questioned how it could take place against a background of bloodshed.

"When Ukrainians kill Ukrainians I believe this is as close to a civil war as you can get."

He also complained about the failure of the Kiev authorities to include the separatists in the first round of so-called "national unity" talks held under OSCE auspices on Wednesday.

Interim President Oleksandr Turchynov has said his administration is ready to reach out to pro-Russians in the east but that the separatists must first lay down their arms.

Analysts warn that Ukraine faces an uphill struggle to hold a successful election, with the International Crisis Group urging Kiev's leaders to listen to the concerns of the largely Russian-speaking east.

The Ukraine standoff has plunged relations between Moscow and the West to their lowest since the Cold War, with thousands of Russian troops still believed to be on the border.

In a further concern for Europe, Russian President Vladimir Putin has threatened to cut off gas supplies to Ukraine if it fails to pay a huge bill by early June.

Nearly 15 percent of all gas consumed in Europe is delivered from Russia via Ukraine, which is facing further economic gloom despite a $17 billion IMF aid package.