Venezuela to file complaint in United Nations over U.S. meddling 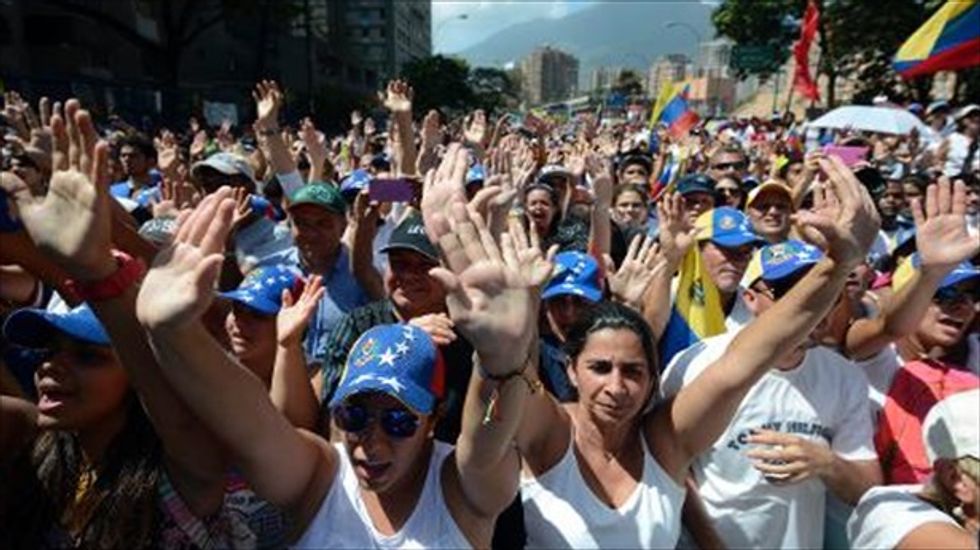 Opposition demonstrators raise their hands as they take part in a protest against the government of Venezuelan President Nicolas Maduro in Caracas on March 4, 2014 [AFP]

Venezuela vowed Sunday to accuse the United States of meddling in its political crisis at the United Nations and other international organizations.

President Nicolas Maduro's socialist administration has been jolted by three months of often deadly street protests that have killed 42 people and wounded more than 800.

Violent protests began in February as an outpouring of anger against the government's inability to tamp down the high crime rate, but quickly spread and included protests against the lack of household basics like milk and toilet paper in this oil-rich nation.

The government has blamed local elites and the United States for what it says is trying to oust Maduro, an elected leftist who succeeded the late longtime President Hugo Chavez. The two countries have had strained bilateral ties for more than a decade.

"We will be making formal complaints at the United Nations, since (the United States) is violating the UN Charter," Foreign Minister Elias Jaua charged on Televen television.

The government has a "comprehensive file" with statements of "interference" from US President Barack Obama, Secretary of State John Kerry and other top American officials, Jaua said.

Those are "in addition to constantly threatening to impose sanctions... Enough already; it is not for the United States to take on authorities that belong to international organizations," Venezuela's top diplomat said.

In recent weeks, the United States has raised the possibility of slapping sanction on Venezuelan authorities over reported abuses of protesters and if a dialogue with the opposition breaks down.

Maduro said Saturday he hopes to speak with opposition members after their leaders meet Sunday with international supporters of the process.

The Democratic Unity opposition coalition (MUD) is scheduled to meet in the capital Caracas with the foreign ministers of Brazil, Colombia and Ecuador, as well as Vatican's envoy.

Opposition leaders began tentative talks with the government on April 10, but there has been little progress and few results.