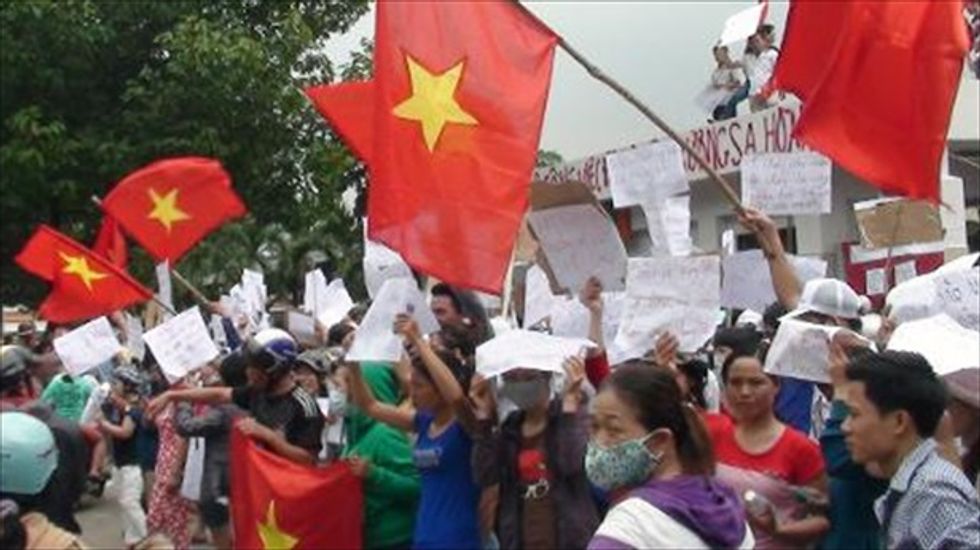 Protesters wave flags and hold placards on a street outside a factory building in Binh Duong on May 14, 2014 [AFP]

The outbreak of deadly anti-China protests in Vietnam raises the stakes for the United States, which has rallied behind Beijing's neighbors but faces ugly new realities.

Demonstrations have spread to a third of Vietnam's provinces, with workers attacking Chinese workers and factories, in a wave of nationalist outrage after Beijing moved a deep-water drilling rig into waters claimed by Hanoi.

The escalation came despite months of U.S. cajoling for an easing of tensions in the myriad disputes in the South China Sea and a separate conflict between China and US ally Japan in the East China Sea.

President Barack Obama has put a high priority on building relations with Southeast Asia, seeing the region as economically dynamic and eager for warmer U.S. relations faced with China's rise.

Vietnam has been a case in point, readily seeking military ties with the United States in a dramatic shift for the onetime war adversaries.

"I think this poses a huge dilemma for the United States," Patrick Cronin, an Asia expert at the Center for a New American Security, said of the violence in Vietnam.

"It's not enough to have a strategic dialogue between Hanoi and Washington. We really have to reassure the Vietnamese public -- not just the government -- that there are going to be agreed-upon rules and that Vietnam will not be victimized."

State Department spokeswoman Marie Harf reiterated the US criticism of China's "provocative" actions but called for protests in Vietnam to be peaceful.

- A setback for Vietnam -

Dean Cheng, a senior research fellow at the conservative Heritage Foundation, said that the violence risked playing into the hands of Beijing, which would consider itself the aggrieved party. China has accused Hanoi of "connivance" with rioters.

"It certainly complicates American calculations because the US tends to want the people it supports to be pristinely pure and good, and attacking foreign direct investment muddies that," Cheng said.

The analyst said that the violence -- also targeting businesses from Taiwan, which is autonomous from China -- risked making Vietnam appear "a lot less pleasant" as an investment destination.

Asia as a whole could ultimately be the loser if foreign investors decide the region is too risky, Cheng warned.

China was similarly hit by violent protests in 2005 and 2012 against Japanese businesses, troubles some Tokyo officials linked to the Beijing government.

Vietnam, a communist nation that generally keeps a tight lid on political unrest, had been seen as taking a more conciliatory approach toward China than the Philippines, a robust democracy that has similar disputes with Beijing but has shown defiance both at sea and in international bodies.

Ernie Bower, the chair of Southeast Asian studies at the Center for Strategic and International Studies, said that Vietnam -- which has thousands of years of complex relations with China -- had been "trying hard not to take the bait as they are students of the Chinese approach."

But the violence in Vietnam "plays right into China's hands" by giving Beijing a rationale to dig in on its stance, Bower said.

A top Chinese general, Fang Fenghui, meanwhile vowed during a visit to Washington to keep operating the oil rig despite Vietnam's anger.

The intense pressure campaign, including the deployment of the oil rig and clashes at sea, are likely part of a strategy of growing assertiveness by China since President Xi Jinping assumed power last year, according to Bower.

Bower said he would not be surprised if China followed up by imposing an Air Defense Identification Zone over the South China Sea, as it did in November in the East China Sea despite protests by Japan, South Korea and the United States.

"We're just seeing the real Xi Jinping," Bower said. "I think that this is actually part of a broader plan and that this is not the last provocation we will see."