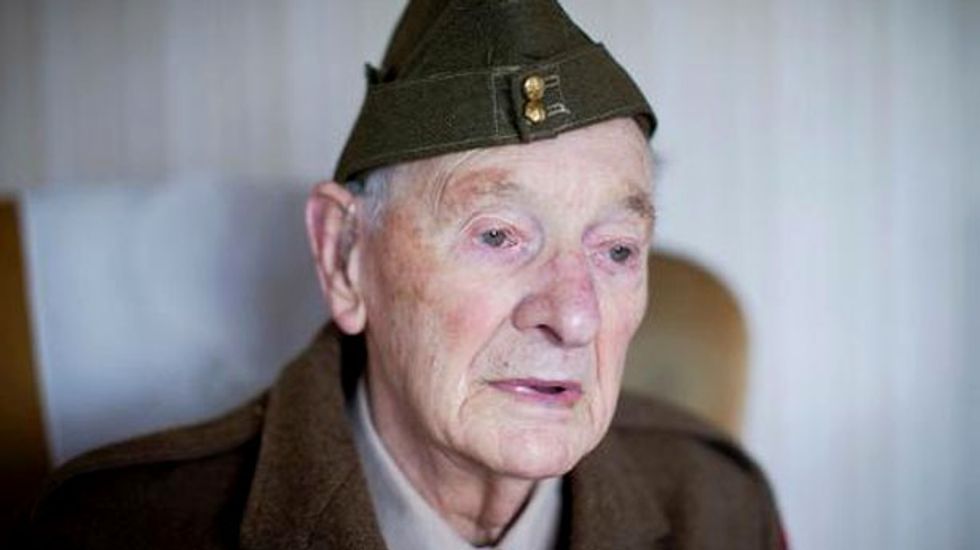 Scared stiff but with nowhere to hide, Ken Scott tried to block out the sight of his comrades being gunned down as he pushed up the Normandy beach on D-Day.

"Soldiers were falling all around, and they were hollering and shouting and calling for their mothers," recalls the British army veteran, now a frail 97-year-old.

"We just had to brush it aside and just keep going, we couldn't stop and help them. It was just impossible. We would have been dead ourselves.

"We had to get ashore and stop those machine guns."

Suppressed for many years, the memories are fresh in Scott's mind as he prepares to return to France next month for the 70th anniversary commemorations of D-Day.

But he takes no pride in it.

"How can you be proud when you see your own mates being machine-gunned down? You can't. No," he said, his voice breaking even now.

Staring out the window of his bungalow in Royal Wootton Bassett, a small town in southern England, Scott is almost pleading, as if he is still trying to justify his survival.

More than 3,000 troops were killed on D-Day, many of them mown down by German machine gun fire within seconds of stepping onto the beaches.

Scott had had three years experience fighting in north Africa, but it was luck as much as anything who was shot on that fateful day.

The invasion had been meticulously planned, but for the soldiers on the ground, the reality of the massive land, air and sea attack was overwhelming.

"There was bombs and shells and God knows what going on all the time. You don't know whether it was aimed at you or Tom, Dick or Harry. Everybody was getting it," Scott said.

These days, he has trouble walking and his eyesight is fading, but the veteran has a vivid memory of stepping off a landing craft into the water and onto the beach.

"You couldn't see the water for ships. And the noise and the smell..." Scott said.

"Imagine -- the whole of the navy opening up with their guns, blasting away at the cliffs to stop the machine guns.

"Then there were the bombers overhead, and some of the bombs were falling a bit short -- absolute chaos."

Having survived the onslaught, Scott marched through northern France and fought on for another 11 months until a ceasefire was agreed, ending five years of service in which he saw some of the worst incidents of the war.

Before D-Day, as a member of the Durham Light Infantry he spent three long years with the Eighth Army in Egypt and Libya as a "Desert Rat", and fought at El-Alamein.

Near the end of the war, he was among the first to reach the concentration camp at Belsen, the hideous memory of which causes his voice to break for a second time.

Despite his horror at the loss of life, the barbarity of the Nazis convinced Scott that the war was justified.

"We really had to take the Nazi clique out, it had to be," he said, yet he insists he bears "no hatred, none at all" towards ordinary Germans.

Scott went back to Normandy five years ago for the first time with his son but now, with "one foot in the grave and the other on a bar of soap", he wants to say goodbye.

At a ceremony at Bayeux Cathedral, he intends to wear a replica khaki uniform that was made for him a few years ago to raise money for the Royal British Legion charity.

He said: "If any journalists ask me why I'm dressed like that, I'm going to answer: 'Well, this is how I came to France 70 years ago, and this is the way I'm leaving.