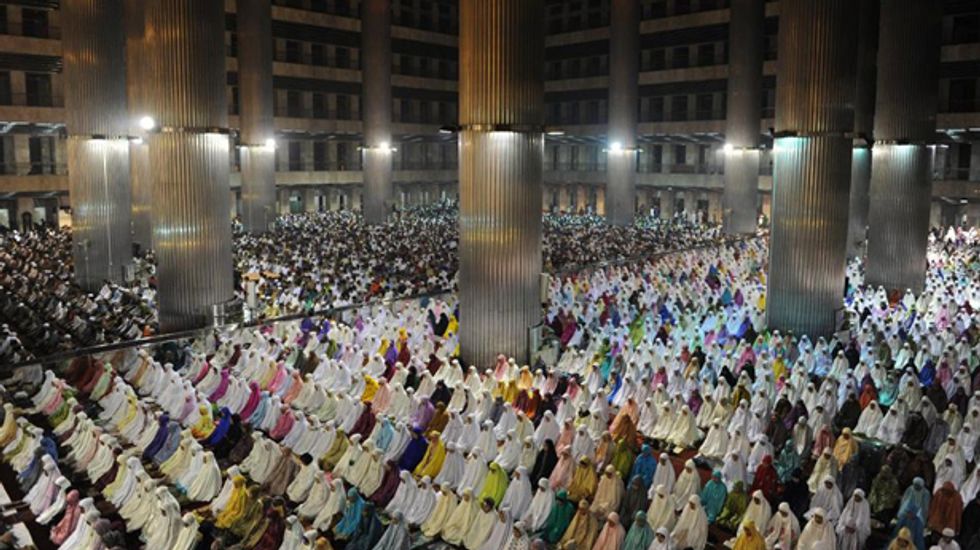 Muslims in much of Asia began celebrating the holy month of Ramadan on Sunday, but in Indonesia even threats by hardliners to raid "sinful" bars could not stop football fans heading to nightspots to watch the World Cup.

Across the Muslim world, the faithful fast from dawn to dusk and strive to be more pious during the holy month, which ends with the Eid holiday.

Ramadan got under way in Asian countries including Indonesia, which has the world's biggest Muslim population at around 225 million people, war-torn Afghanistan, Malaysia, Sri Lanka and the Philippines.

Hardliners in Indonesia have pledged to raid bars that continue to sell alcohol, which Muslims are banned from drinking under Islamic law, or stay open too late. Authorities order bars and other nightspots to close earlier during the holy month.

Radical group the Islamic Defenders' Front would "monitor any sinful activities in entertainment places, cafes and bars during Ramadan", said Salim Alatas, the group's chief in the capital Jakarta.

"If law enforcement officials do nothing about immoral activities, we will do anything we can to stop them, using our own methods."

But the threats did little to deter people in the football-crazy nation, where most practise a moderate form of Islam, from heading out to catch the latest World Cup action.

Bars that remained open in Jakarta were packed with locals and expatriates late Saturday and early Sunday.

"For me, the fasting does not really affect my enthusiasm to watch the World Cup," said Intania Permata, a 22-year-old student, who was watching the Brazil versus Chile nail-biter at a South American bar and restaurant.

Endika Setiadi Putra, 27, said that with the World Cup now in the knockout stages, the excitement would keep drawing people to watch the matches in bars even during Islam's holiest month.

"If it is the weekends, most people will go out (to watch the matches)," Putra told AFP.

The holy season also presents a dilemma for Muslim players in the World Cup, as choosing to fast will affect the strict diets they usually have to follow.

The problem is most pressing for the team from Muslim-majority Algeria, who face a tough match against Germany on Monday.

For many other Indonesians, the start of Ramadan was a time to be with their families or take part in special prayers, with thousands heading to Jakarta's Istiqlal Mosque, the biggest in Southeast Asia, on Saturday evening.

Politics was in focus in war-torn Afghanistan, with conversation at "iftar" meals after sunset expected to focus on the disputed vote count from the country's presidential election.

Results are due out during the holy month, but Abdullah Abdullah has cried foul in the race against Ashraf Ghani, alleging massive fraud. The inauguration of the new president is scheduled for August 2, shortly after Ramadan finishes.

Sri Lanka's Muslims, who account for about 10 percent of the country’s 20 million population of mainly Buddhists, are set observe a low-key Ramadan after a spate of recent religious attacks.

The Muslim Council of Sri Lanka, which groups nearly 50 Muslim organisations, said authorities had promised tighter security but many were still afraid of Buddhist extremist attacks after four people were killed in religious riots this month.

In the predominantly-Catholic Philippines, the country's Muslim minority was observing its first Ramadan since the signing of a peace deal between the government and the largest Islamic rebel group after decades of conflict.

Von Al-Haq, military spokesman of the Moro Islamic Liberation Front, said the former rebels would seek to use the holy month to try to persuade breakaway groups still fighting the government to lay down their arms.

In Malaysia, Muslims -- who account for 60 percent of the country's 28 million people -- will spend the late afternoon buying food at markets or meeting at restaurants to break the first fast together in the evening. There will also be special prayers at mosques every night during the holy month.

As in Indonesia, thoughts of the World Cup were uppermost in the minds of fans in the football-keen nation. Ridzwan Rahim, a copywriter, 37, said he looked forward to catching some of the matches when he wakes up for his pre-dawn meal during Ramadan.

"It's good this year -- we will wake up early anyways so we can watch some of the matches," the Germany and Netherlands fan said.

Ramadan begins when the first crescent of a new moon is sighted. The holy month was also starting across the Middle East, as bloody conflicts rage in Iraq and Syria.