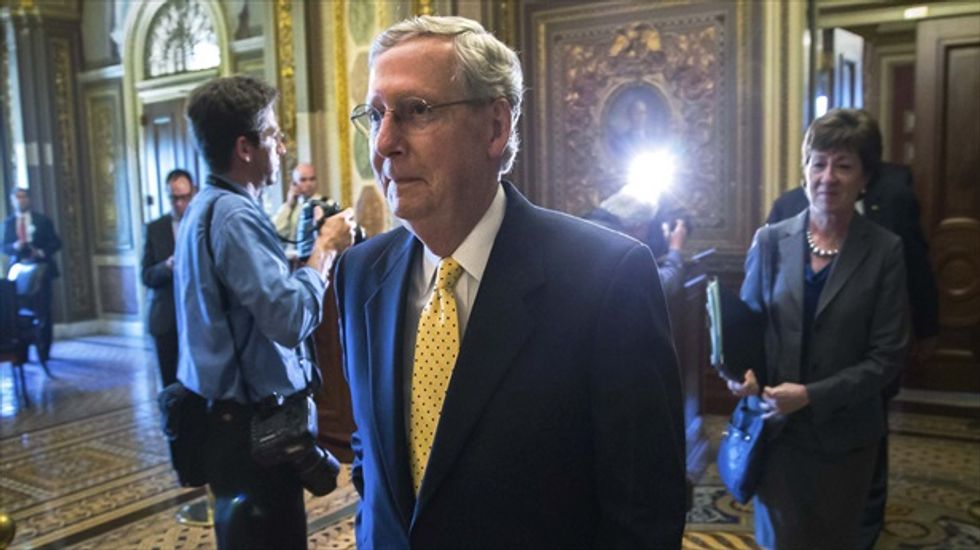 By Emily Stephenson and Patrick Temple-West

The senators anticipate the proposal would generate a windfall in revenue that would be used to fund federal transportation projects.

U.S. Senate Minority Leader Mitch McConnell told reporters in the Capitol that Republicans had discussed a corporate tax repatriation "holiday" idea and "it enjoys a good deal of support in our conference."

The plan would give companies a one-time reduction in the amount of taxes they pay on profits earned abroad, giving them an incentive to repatriate those earnings.

Supporters say that could generate a revenue windfall to bolster the federal Highway Trust Fund, used for construction and repair projects. The fund is expected to run out of funds by late August.

While emphasizing that a repatriation holiday is still far from becoming legislation, the Senate's top tax writer said it could be used as a way to replenish the looming shortfall in the highway fund.

"Nothing has been agreed to. Nothing has been ruled out," said Ron Wyden, the Democratic chairman of the Senate Finance Committee. Wyden added that "one new aspect" to the repatriation holiday debate was an announcement by Ebay Inc in April that it would repatriate some of its foreign earnings for spending projects in the United States.

The company said at the time it took a $3 billion non-cash tax charge in the first quarter as part of its repatriation.

"Those folks brought their money back without any tax break," Wyden said of Ebay. "What are the implications for that in this debate?" He said.

Under U.S. law, companies do not have to pay the 35 percent corporate income tax on most of their overseas profits until they are brought into the United States. These earnings can be held offshore indefinitely.

When Congress enacted a repatriation holiday in 2004, corporations were allowed bring foreign profits into the United States at a 5.25 percent tax rate - a bargain that hundreds of companies took advantage of to repatriate billions of dollars.

In Congress’s latest consideration of a repatriation holiday, the special low tax rate would be revived, but with certain caps on interest deductions that would help raise revenue, a Republican tax lobbyist told Reuters on Tuesday.