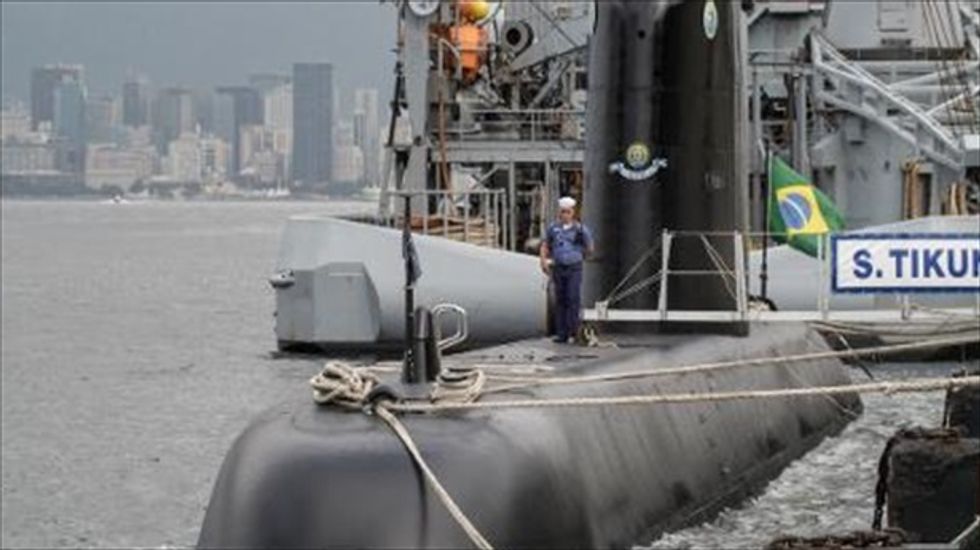 The BNS S34 Tikuna Brazilian diesel-electric powered submarine moored at the navy base in Niteroi, Brazil, on May 27, 2014 [AFP]

Brazil is building five submarines to patrol its massive coast, including one powered by an atomic reactor that would put it in the small club of countries with a nuclear sub.

The South American giant is in the process of exploring major oil fields off its shores that could make it one of the world's top petroleum exporters.

"The nuclear-propelled submarine is one of the weapons with the greatest power of dissuasion," he told AFP.

"Brazil has riches in its waters. It's our responsibility to have strong armed forces. Not to make war, but to avoid war. So that no one tries to take away our riches."

The new submarines, which will replace Brazil's aging fleet of five conventional subs, are being built at a sprawling 540,000-square-meter (135-acre) complex in Itaguai, just south of Rio de Janeiro.

The project is a joint venture between the navy, Brazilian construction firm Odebrecht and French state defense firm DCNS.

Brazil and France signed a deal for the project in 2008 under which DCNS is providing building materials and training while Brazil builds up its own submarine industry.

Brazil is developing the nuclear reactor and enriched uranium itself.

The first submarine, a conventional sub called SBR1, is 45-percent complete and scheduled to launch in 2017. The second is in the early stages of construction and is due to launch in 2019.

Work on the nuclear sub, SNBR, is supposed to start in 2017, with a launch target of 2025, the year the project wraps up.

Workers are assembling the submarines in a massive 38-meter-tall (125-foot) hangar, putting together the giant sheets of steel that will form the hulls.

When complete, the nuclear submarine will measure 100 meters long and weigh 6,000 tonnes. Its conventional cousins will be slightly smaller, at 75 meters and 2,000 tonnes.

Currently the only countries to design and build their own nuclear submarines are the permanent members of the United Nations Security Council -- Britain, China, France, Russia and the United States -- plus India, which has completed one and is in the process of building more.

nlike conventional submarines, which run on electric or diesel engines and have to resurface every 12 to 24 hours to refuel, nuclear submarines run on atomic power and can stay immersed indefinitely.

They can also be outfitted to launch nuclear warheads -- though under Brazil's constitution and the Nuclear Non-Proliferation Treaty, the country is barred from developing atomic weapons.

Its five new submarines will be equipped with conventional torpedos.

Brazil's navy says the conventional submarines will patrol ports and other strategic points along the country's 8,500-kilometer (5,300-miles) coast.

The SNBR will patrol farther away, around the country's "pre-salt" deepwater oil reserves -- estimated at up to 35 billion barrels -- and the so-called Blue Amazon, a biodiverse area off the coast with minerals including gold, manganese and limestone.

According to the Stockholm International Peace Research Institute, Brazil had one of the world's 15 largest defense budgets in 2013, at $31.5 billion.