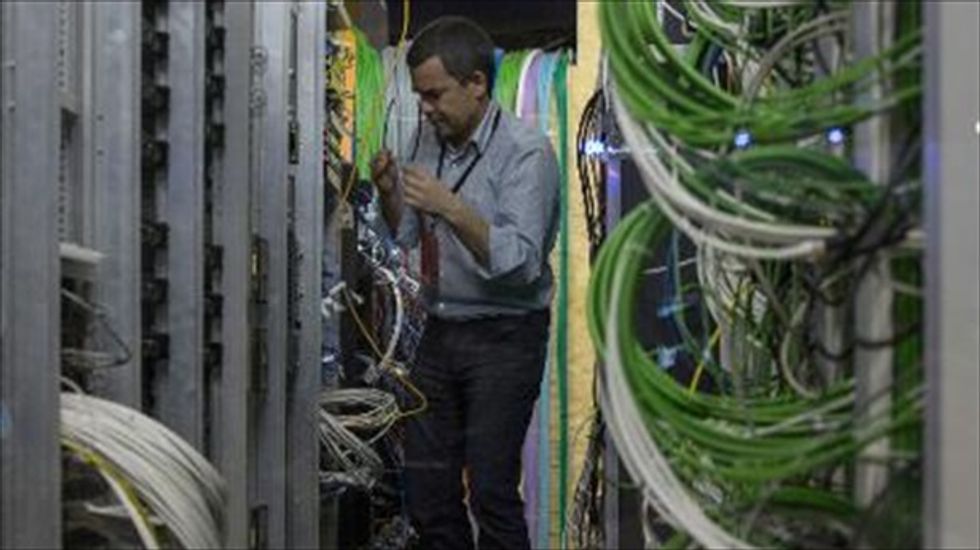 A technician work on the servers at the master control room at the International Broadcast Centre of the 2014 FIFA World Cup in Rio de Janeiro on June 2, 2014 [AFP]

With 10 days until the World Cup begins, Brazil was rushing Monday to finish installing seats in stadiums and to deal with threats ranging from violent protests to dengue fever.

The count-down to kick off has been marred by protests -- from striking drivers who abandoned their buses mid-route to indigenous leaders in bright-feathered headdresses shooting arrows at police.

Anger over the more than $11 billion being spent on the event has raised fears of a return to the violence seen last year during the Confederation Cup, a World Cup dress rehearsal.

Then, clashes erupted as a million people flooded the streets calling for more money for social programs and less for stadiums.

But recent protests have been smaller, with journalists and street vendors sometimes outnumbering the crowds of anti-government demonstrators chanting: "There won't be a World Cup!"

In a country that takes pride in its five World Cup titles, the tournament is starting to unleash growing excitement, with media providing exhaustive coverage of the Brazilian team's training camp.

That national ambivalence is the target of a viral social network joke.

"I see you! You write on Facebook that 'There won't be a World Cup,' but you've planned a barbecue with your friends on game day," says a caption above a photo of President Dilma Rousseff.

The real Rousseff was due to meet FIFA chief Sepp Blatter Monday afternoon at a ceremony to present the World Cup trophy.

The world football body was meanwhile under fresh scrutiny over new allegations its officials took bribes to name Qatar the 2022 World Cup hosts.

But FIFA secretary general Jerome Valcke dodged questions on the controversy as he launched the TV broadcast center for the World Cup in Rio de Janeiro.

"No answer, no question," he said.

Valcke has had a rocky relationship with Brazil, whose preparations have run chronically behind schedule.

The host stadiums in Sao Paulo, Curitiba, Cuiaba, Natal and Porto Alegre are all unfinished to varying degrees.

The Corinthians Arena in Sao Paulo, which will host the opening ceremony and first match between Brazil and Croatia, held a hastily scheduled second test event Sunday but is still under construction.

Temporary seating areas for 20,000 fans -- delayed after a worker fell to his death, one of eight construction accident fatalities at stadiums -- have still not received safety clearance from firefighters.

The original deadline for all 12 host stadiums was December 31.

Organizers have shelved much of the other infrastructure they had promised, from roadworks to a high-speed train to subway and monorail lines.

Football legend Ronaldo, a member of Brazil's World Cup organizing committee, admitted last week that only 30 percent of the planned projects would be completed.

Rio Mayor Eduardo Paes warned tourists not to expect Brazil to be like home.

"Rio is a city that doesn't hide its poorest people like other places."

Brazil will have 157,000 police and soldiers providing security during the tournament.

But recent police strikes -- and threats of more during the tournament -- have raised security fears in a country with one of the world's worst crime rates.

The stakes are high for Rousseff, who is up for reelection in October.

The leftist leader is leading in the polls, but her top rivals have been consolidating their support.

Analysts say the results on the pitch will probably not affect her chances.

But if the Brazilian team loses the tournament may do little to lessen public anger over the money spent hosting it.

Public health officials are meanwhile scrambling to fend off a threat to Cristiano Ronaldo's Portugal and John Mikel Obi's Nigeria, whose base camps will be in Campinas.

The southeastern city is in the middle of the worst dengue fever outbreak in its history.

Sanitation workers are spraying for mosquitos, which carry the tropical virus.